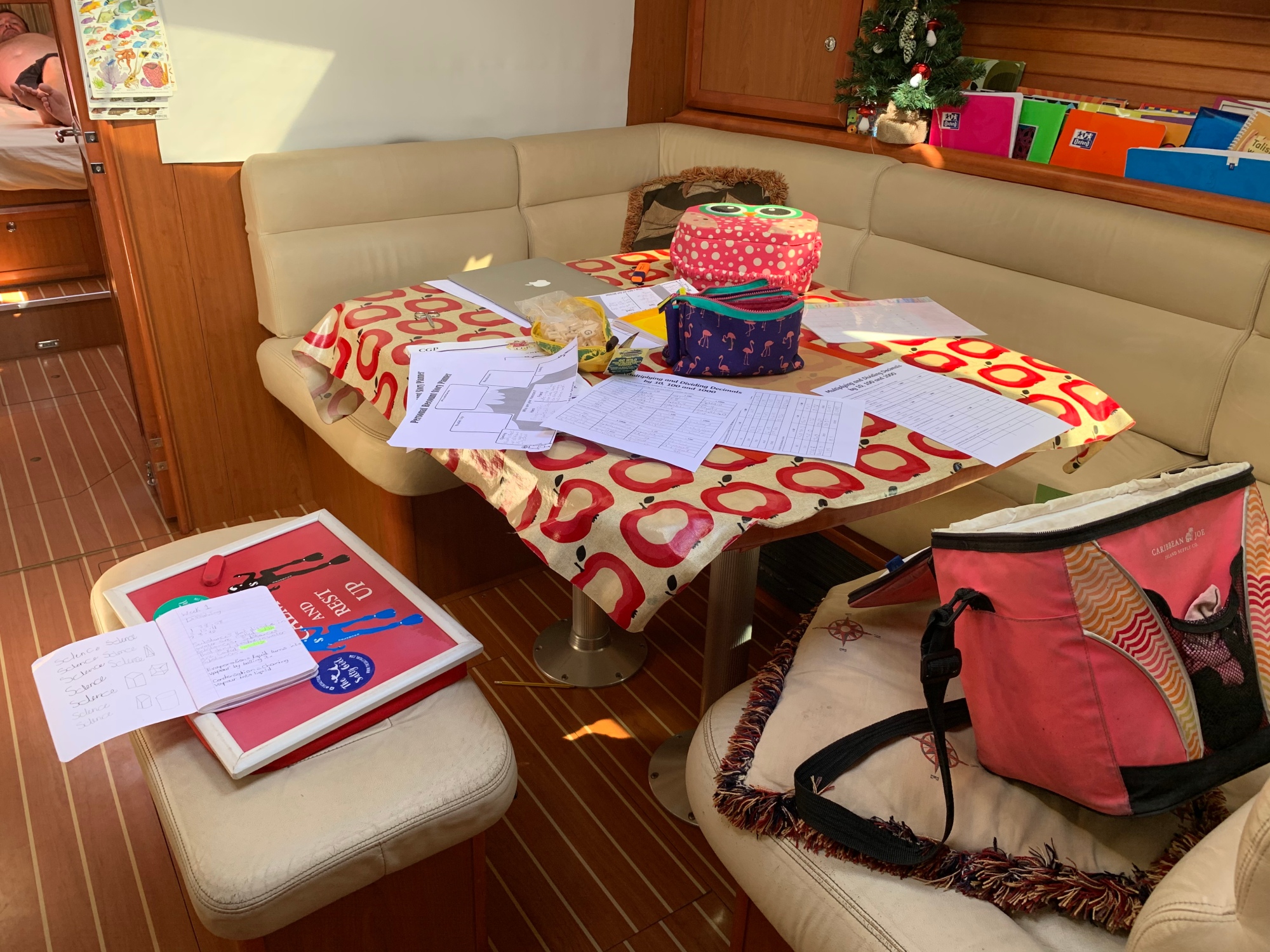 Of course, as the term ends, children get sick. My kids always got sick at the end of term. The increase in work load would coincide just as they were getting tired. One year, one girl got chicken pox (I cant remember which one!) on the first day of the Christmas holidays – and the other got it on the last day of the holidays. We had a full month of the chicken pox – cause of course they never, ever get sick together.

Now we’re travelling again, I don’t feel the usual rules apply. Not spending time around other kids for example, the girls aren’t being exposed to the same amount of bugs if they were at school. We haven’t met any fellow cruiser kids yet either – so no bugs from them. Indeed, all the anchorages we’ve encountered this season have been quiet so far. That will probably change when the reputed thousands of boats crossing from Europe arrive during the next few weeks.

It can be a funny bubble – this cruising life. Staring around the anchorage, most fellow cruisers are here to relax. We see it all the time. Whether it’s the couple sitting on their foredeck for hours in the Caribbean morning, lounging on bean bags, or the couples who approach each other in the anchorage looking for dominoes partners. It seems cruisers’ main task is kicking back. Well, most boats.

Some crazy ones are here to work and relax. Some boats do internet school which run live classes – and need to get up early to attend school. Of course, it’s not the same thing as getting up and actually having to go to school. Still, school is school. I don’t see the bean bag guys doing it.

In the last few weeks, there have been extra assignments. School is giving out IGCSE exam questions for Lulu to practise. Her exams aren’t for another eighteen months, but InterHigh wants their students to start feeling confident answering exam-style questions. It makes sense, no?

Delph too has been working on comprehension questions. On Sunday she tackled pages of decimal changes for maths homework. The upload deadline was Monday. She worked well and it was all fine, except that Sunday was the day we could have walked around Antigua’s historic Nelson’s Quay.

People often say that sailing with your kids is about giving them an experience they’ll never forget. That the learning they’ll do while exploring new places is much more important than simple classroom learning. We’ve discovered they still have to do the classroom learning though – as well as the travelling. This means there hasn’t been a lot of time to sit in those bean bags. Time is like this. You always have to make choices.

So, bring on the end of term!

Lulu woke up this morning, frowning and holding her ear. She came into my cabin and said, ‘I feel like I’m getting an ear infection.’