We checked in to Guadeloupe – at the police station. It was proper official, with a police reception, two offices and a clearance computer at the end of the hallway.

Bit different then to our last French clearing experience. In a cafe in Martinique, a lady stamped our form without even a nod at our passports. You can clear customs wherever there’s a clearance computer in the French islands. They are located in cafes, marina offices and here in Deshaies – at the police station.

The police officer was doing things his way. With his blue police jacket hanging on a hook behind him, he carefully studied our passports against the clearance form. I held my breath while he went over it. I suppose if I’d got it wrong, I’d just have amended the form – it’s not as if he’d kick us out of Guadeloupe. This isn’t America. Still, he had that official and slightly scary police nod. Very thrilling 😉.

Deshaies was much nicer land-side than it has been staring at the shoreline for the last couple of days. From Quest’s side, it doesn’t look so handsome. Then, as you walk up the dinghy dock, the smells hits you. Bread, spices, coffee. Good smells – not so shitty after all.

Then the gabled waterfront properties come into view. They have overhanging roofs so, like today, you can shelter. We tease Ellie that she’s brought the Welsh weather, but the truth is that the Christmas winds have kicked in over the last week. Rain and wind on squally repeat. Christmas 🎄 is definitely on the way.

It’s fun being here with Ellie as she discovers her Caribbean firsts. She’s been keenly watching turtles glide and pop up through this anchorage. There are loads here in this deep sea grass. On land today she gasped when she discovered land crabs. The crabs protectively guard their holes – just on the side of the road. It is a bit of a surprise at first: crabs in grass.

Ellie taught us something too: that this area is the filming location for the BBC series Death in Paradise. We’d heard of it through the years, but have missed actually watching an episode. It felt like a shame, since much of the show is filmed right here – the town scenes, cafes and church. It made sense. Deshaies is small enough to be picturesque while being orderly and clean too.

A big, modern bus made its way through town towards the capital Pointe-a-Pitre. A glass-fronted library stood opposite a Spar supermarket… a Spar! So much Europe in the French Caribbean. For nine seasons Death in Paradise has been Anglicised for the task. Its fictional setting – the island Saint Marie is a British Overseas Territory with French overtones – a sort of St Lucia it sounds like, but in France.

We bought supplies, including baguettes and goat’s cheese. It’s an Ormerod favourite. Too much goat for me though. I veer towards the emmental. After our police station clearance trip, we had a whiz around town full of land crabs and an impressive statue of military rebel leader Louis Delgrès – more on him later.

A quick stop for espresso and a giant almond cookie – prices kept strictly to a French suburban equivalent by regulation, pretty cool, no? – it was time to head back to Quest before another rain shower smacked us on our heads.

‘Five minutes and we’re done,’ Ellie observed as we walked back to Edna. 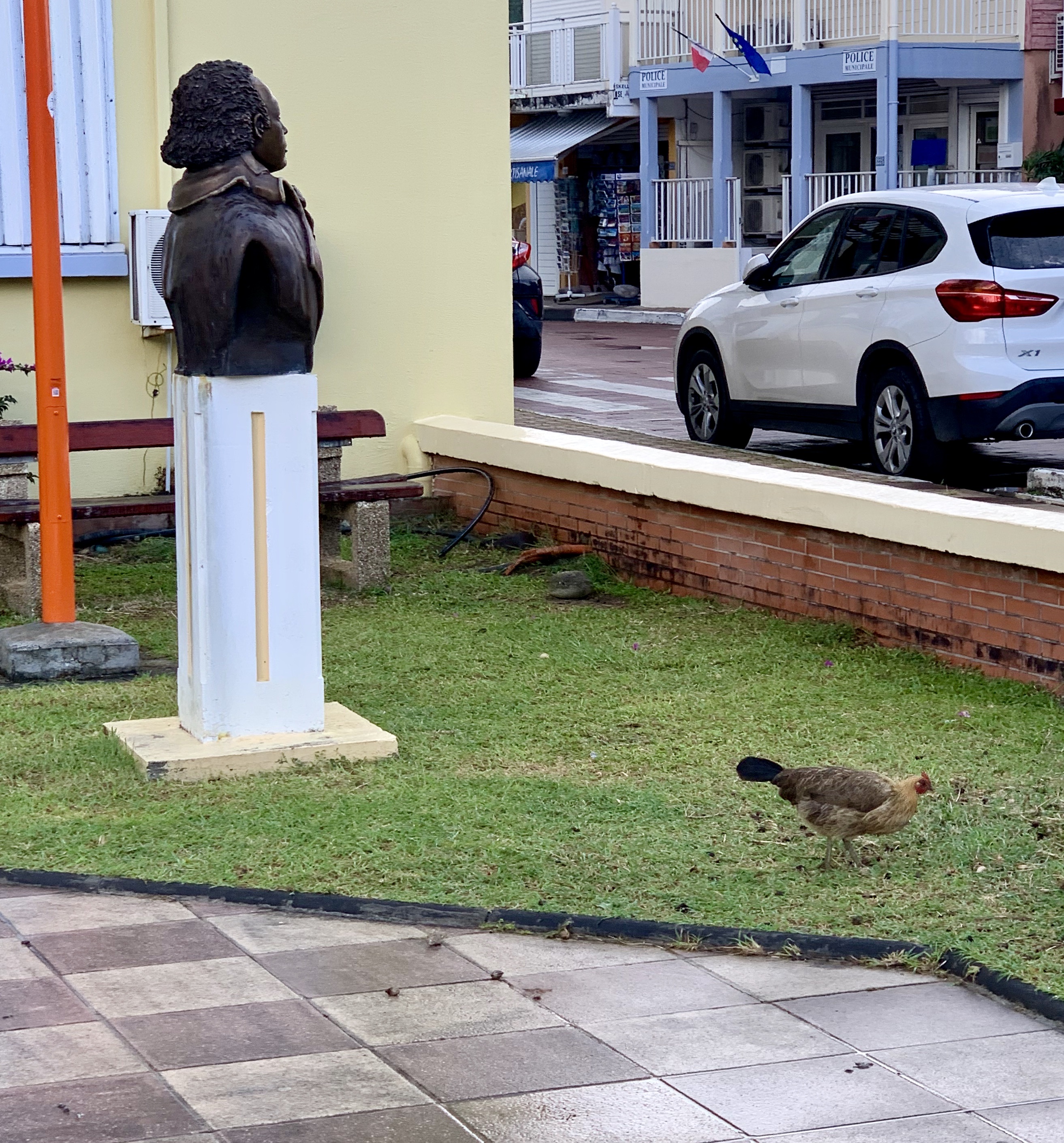 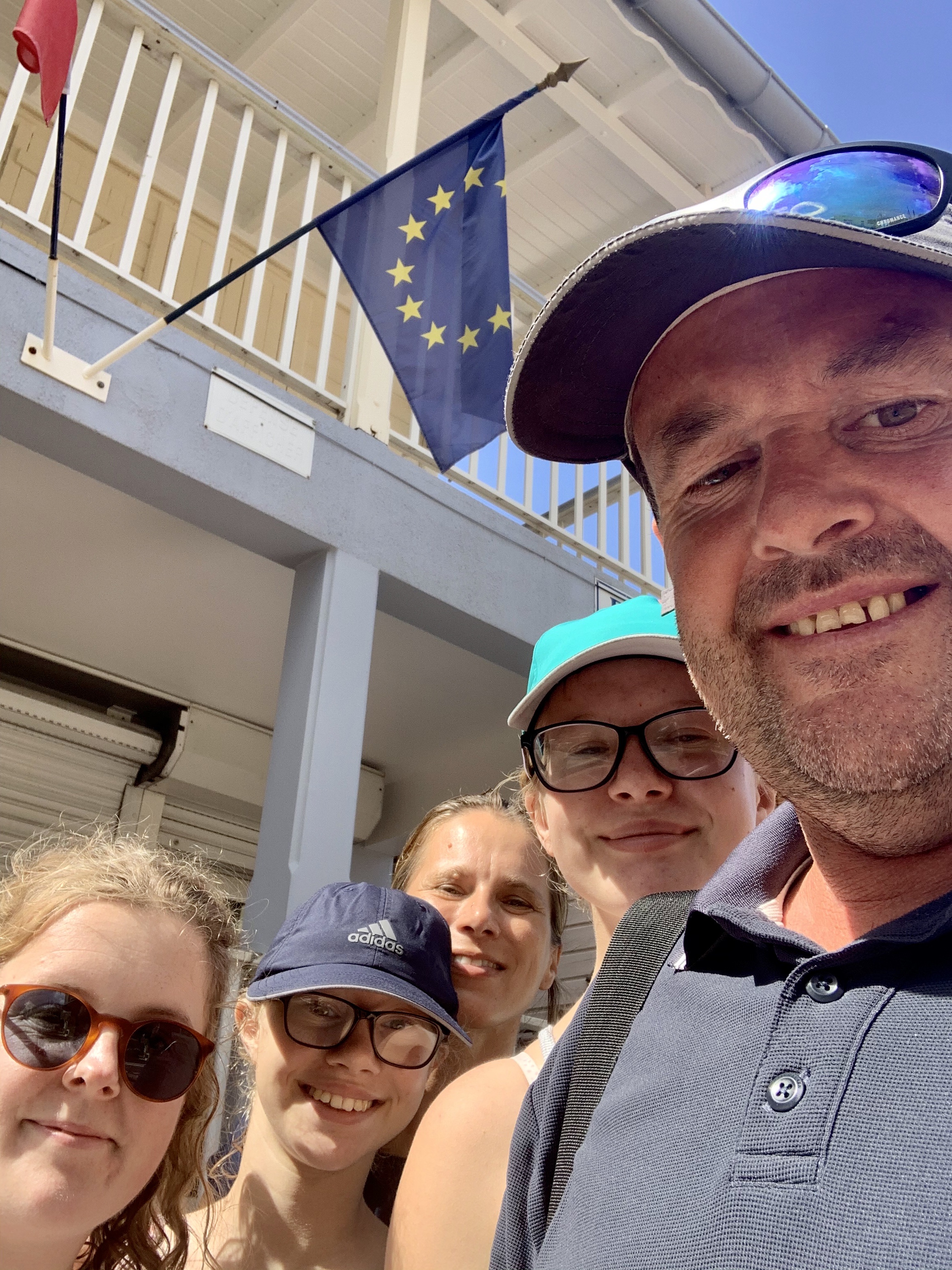 One thought on “Death in Paradise”