Lulu’s been playing Christmas songs since November. As much as she loves Christmas, I think this is the first time she’s been this early with festive cheer. Wham and Mariah Carey and Chris Rhea have been endorsing her Christmas spirit fifteen anchorages ago.

At first we protested. In the same vein as when you hear Driving Home for Christmas in the shops after freaking Halloween. We took turns yelling, ‘Lulu – turn it off!’

Lulu didn’t. In the middle of these turquoise anchorages she was busy bopping to all of it – so eventually we gave up trying. Chris Rhea started growing on me. Like a bunion.

Our plan was to pick up Ellie and go to Les Saintes for Christmas. A small group of islands just south of Guadeloupe, we’ve been here before. It never felt for long enough. One of the reasons is we’ve never got a good internet signal – one bar of 3G at most.

‘Let’s snorkel and dive that reef and then do school, write emails and connect back to the world.’ Not exactly how most people go off sailing. We’ll take it though.

For this the French islands are good. The food is reasonably priced and infrastructure is pretty developed. In Martinique, we bought a Digicel data plan for 50GBs a month for 50 Euros – a great deal in the Caribbean. Cancel any time and use on most of Caribbean islands.

We went to Pigeon Island in Guadeloupe. We were kicked off our mooring by five official rangers without even dipping a toe into Cousteau’s marine park. They explained the buoys are only for dive boats. Quest would have had to anchor across at the mainland and dinghy over. It was blowing a hoolie. Not an easy ride over.

If we weren’t on a schedule, maybe we could have waited. Lu’s Christmas music was playing though. We kept going. Down we went another 10nm to Basse Terre. There were no mooring buoys anymore – except for one lonely boat. We anchored next to it and rolled in an impressive swell with Quest licking at the town’s breakwater. No wonder there were no more buoys. First light we lifted the hook.

There was a no-going-back feeling as we approached Les Saintes Passage. It quickly turned into a steady 30 knots – and of course at a beating angle. We held on. Reefed our stay sail – a hanky to begin with. Needless to say, we didn’t meet another vessel heading in the same direction for 6nm, but at least it wasn’t squally.

We reached the lee of Les Saintes fine. Just the wrong side. The back end – typical. Jack started the engine and did the old trick of scooting into the calm of the cliffs before making our last approach directly into the wind. Over 30 knots of wind slowed us to a 3-4 knot progress. We inched forwards.

The big task was to avoid the obstacle course of fishing pots placed by the islands’ coastline. A few small fishing boats were out too and waved, bemused to see us in their patch. Eventually we rounded the last breaking headland and entered the entrance to Les Saintes Bay. The mooring field of the main island, Terre-De-Haut lay just ahead.

We’d made it! Time to relax for Christmas. After we took a buoy in the quietest corner of the mooring field, we turned on our phones. Not even 3G. I didn’t think the E symbol still existed.

Oh well. It’s enough for us. It’s Christmas 🎄. Lulu’s music is finally on point. Except we need a birthday song too – as it’s mum and Ela’s birthday today. Happy Birthday ladies 🥳 💕. 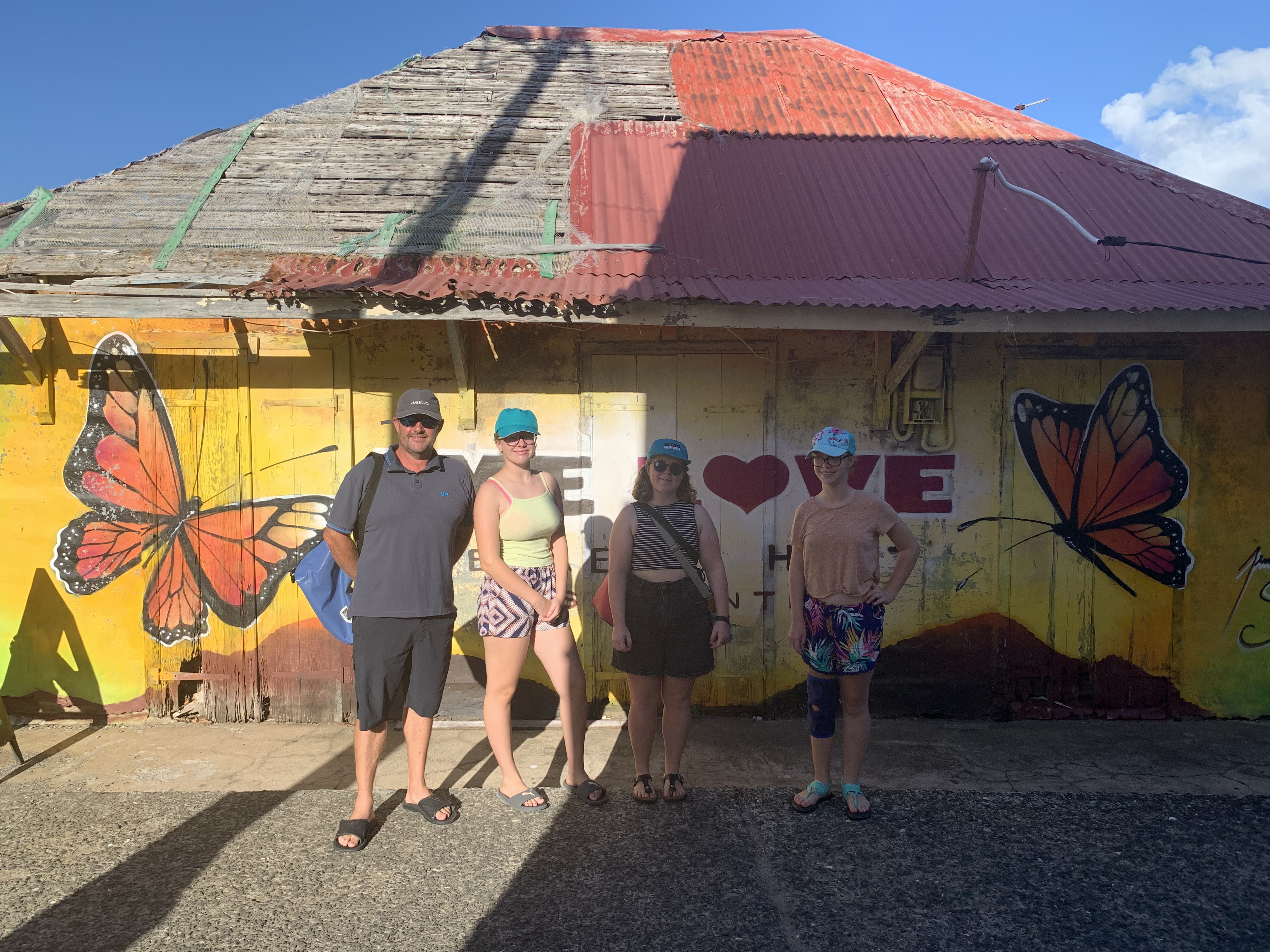