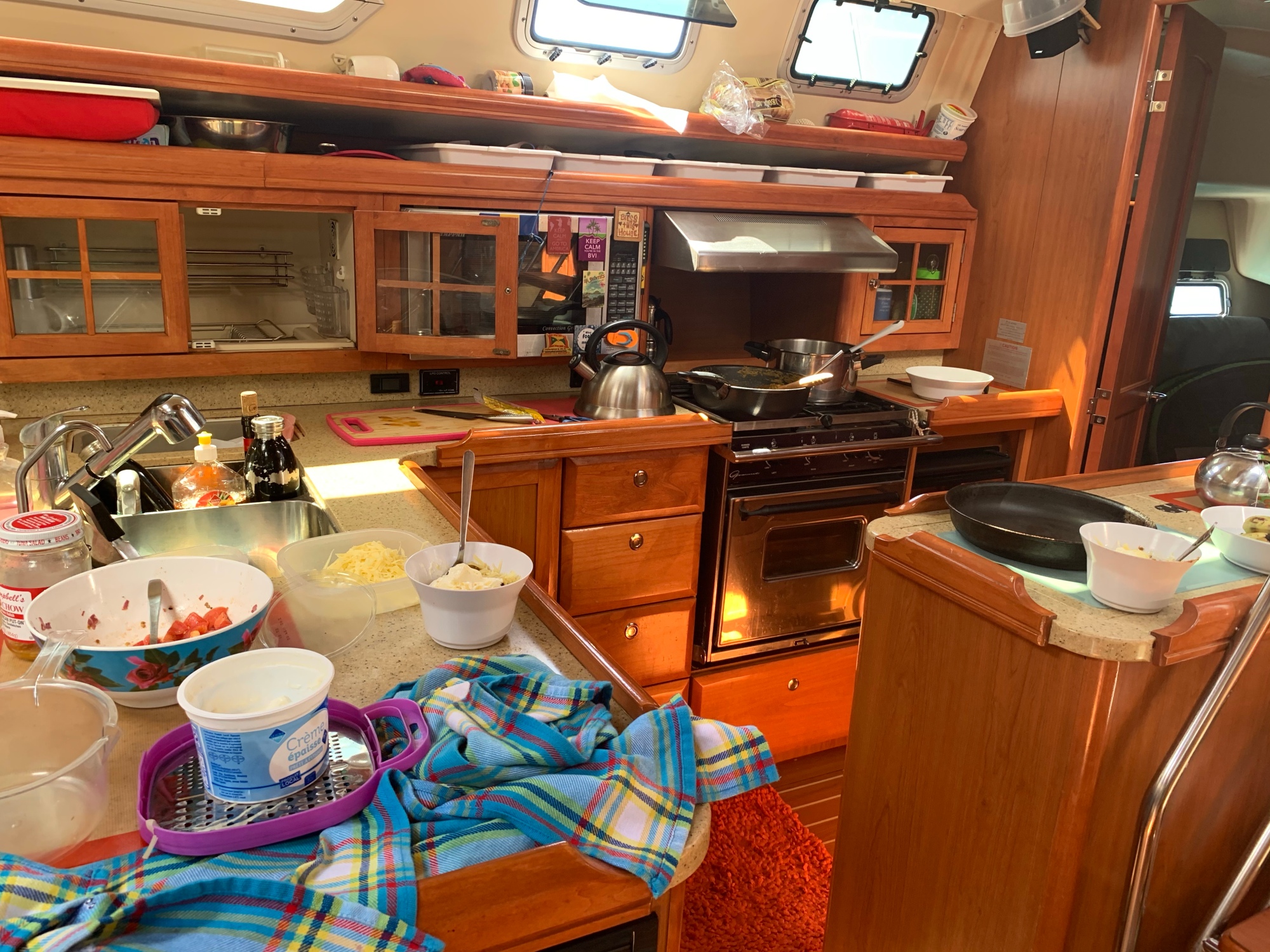 I took a photo of the galley today just as I finished cooking lunch.

I’ve wanted to write about boat cooking for a while. Partly because I’ve just joined the Facebook group Cooking on a Boat. It’s lentil, meat, fish and salad – in a thousand different combinations.

I’ve been abstaining from taking photos of my own delicious one-pot meals to send though. Have to sit on my hands not to.

Why not? I think because even sailing communities can feel like Lester Bangs’ quote in Almost Famous. ‘You’ll meet them all again on the long journey to the middle.’ I might send them a picture of my galley mess.

Questie has working space on both sides of the galley to account for leaning over at sea. She has a drying cabinet for washed dishes. Two sinks. A microwave. Two fridges. Two freezers too. She also has an ice-making machine as a cupboard – not in current use. I use it for storing Tupperware instead. It might not be ice but it is a handy little cupboard.

Cooking on a boat is different to cooking at home. It’s usually about saving gas. At the moment, it’s taking us about two weeks to go through one 5lb gas bottle. We’ll swap the European-style bottles in the French islands or fill them on the other islands. Here in Barbados we take our gas bottles in a taxi to fill at the petrol station.

Using our gas carefully, plus having less space, means less fuss generally. Less time spent baking and roasting. More time using our pressure cooker. The pressure cooker is our star player on Quest – we don’t even have one at home.

Last night, I pressure-cooked lamb necks with a bouquet garni. It only took ten minutes. You can buy the garni everywhere in Barbados as a bunch: thyme, salad onion, two scotch peppers and a hunk of parsley. Added cream, a bit of stock and red wine at the end.

It also takes just ten minutes to cook dried, unsoaked lentils with the pressure cooker. I’m not sure I’d be able to feed Quest’s crew a single lentil at home. Here however, they eat bowls of it without complaint. My current dish isn’t pretty to look at, but with Mexican-style cumin and paprika flavouring, it’s nice to eat with grated cheese and sour cream on top. Like re-fried beans minus the meat.

Veggie meals are still a challenge with these fervent meat eaters on board. Jack and Lulu. And they gang up on me like wolves if I don’t cook it enough for them. Trust me – it can be scary.

I’m starting to win though. Helps being here. Barbados is expensive for food – particularly meat. Fish less so, but funnily we don’t eat much fish – unless we catch it. We like fish almost too much to eat them.

Something’s gotta give. I’d definitely give up meat in a heartbeat – cut it down to once a week at least. Slowly getting there. Read more Cooking On a Boat veggie posts.

In the meantime, there’s always the washing up. 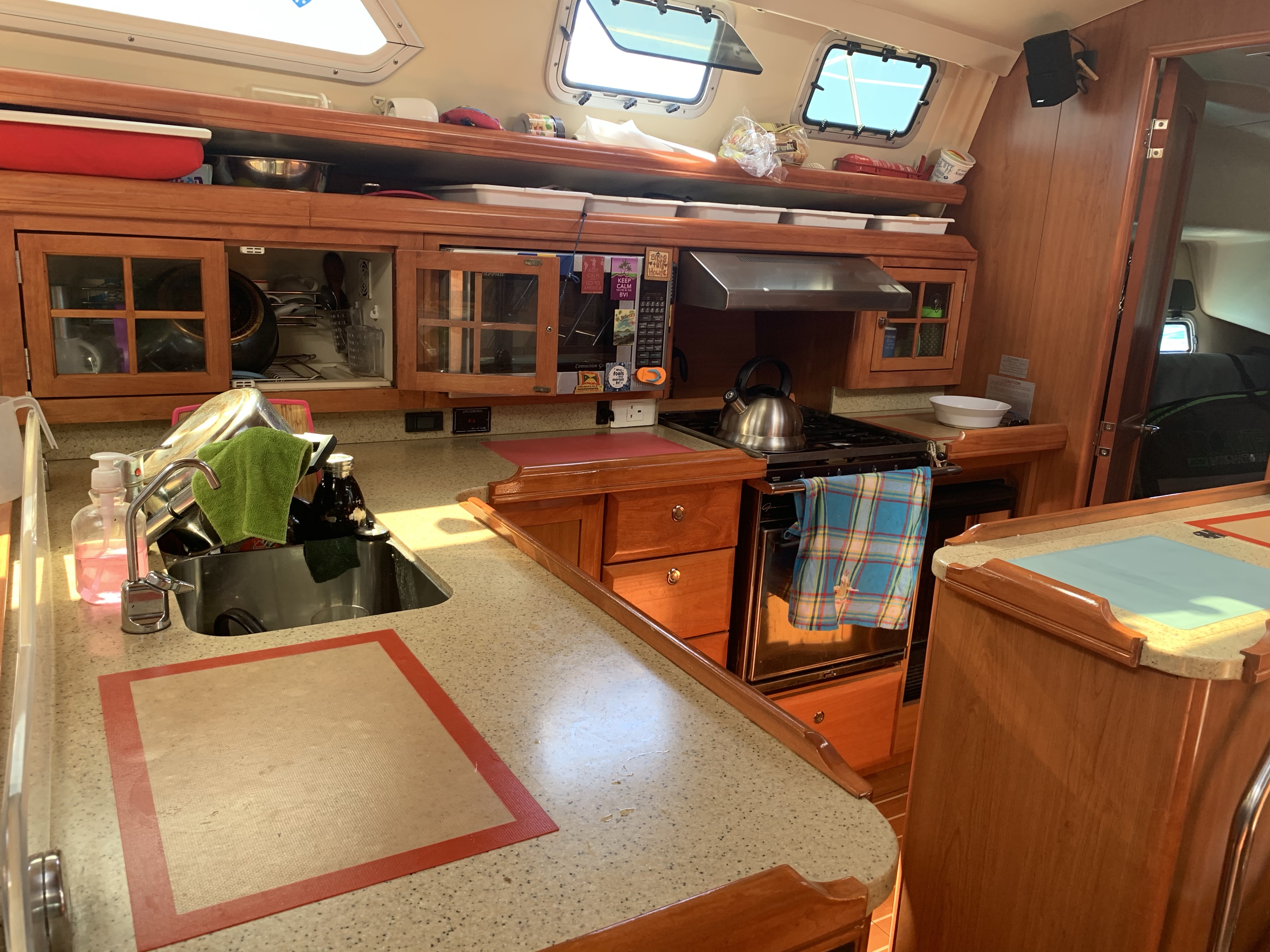