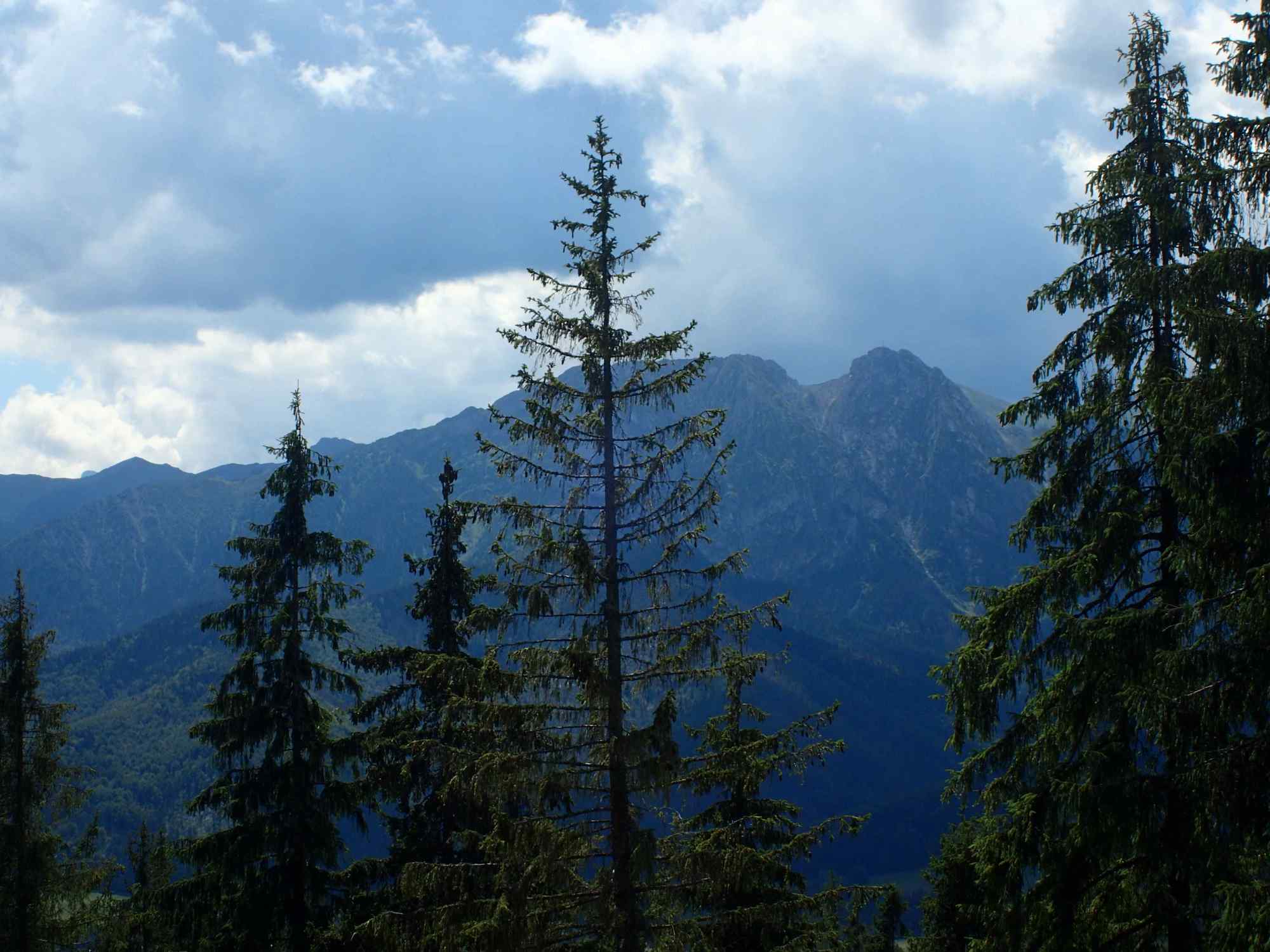 ‘Your grandfather used to come here with a plan for every day,’ Pani Hania, Antosia’s younger sister said. ‘He’d have it written down on cards. ‘On Monday it would say “Get up at six.” Then he’d write down each walking itinerary.’

I watched her giggle. When my grandma and I used to come back from the mountains, my grandfather would wait until after supper and lay the map out on the table. ‘Tell me,’ he’d say peering at the peaks and trails, ‘which route you took from Morskie Oko to Pięciu Stawów.’ His eyebrows would hike up when we gave our answers. ‘Hmmm.’ The harder the climb, the more they twitched. He never went with us. I never even questioned why.

Zakopane must have been busy before. Now it’s just crowds and crowds ambling down the main street. Still, crowds in town are better then up in the mountains. We set out early to the first valley. Mała Łąka. Small valley. A misnomer. It’s enormous. A path cuts through the middle with untouched meadows either side. No one strays from the path. Indeed, just the the idea of it is strange and vaguely offensive. Though my grandfather did. He was crazy though.

Part of the appeal of the path network lies with the trail identification scheme. The Tatra National Parks has an addictive colour-coding system. Up to Mała Łąka? Yellow. A painted flag. White, yellow, white. Drawn on trees, stones, sometimes with arrows. Impossible not to love. Plenty of times we’d looked for these flags on remote Tatra trails going through dense forests. Going the right way! 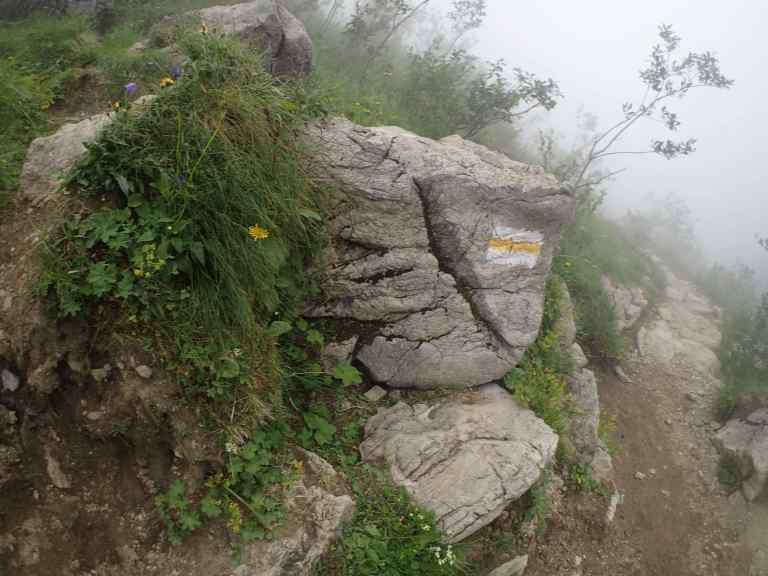 Since you have to pay for entry to the National Park, the uphill walk to Mała Łąka has been laid with small, even stones. Not exactly climbing. Like motoring uphill through a garden centre.  Delphine was in complaint mode from the first step upwards. ‘My leg hurts.’

‘Which leg? Your right leg?’

‘How come it hurts?’

‘From when Babciu fell on me.’

‘Why didn’t you tell us this morning?’ I could see the big bottle of paracetamol in the bathroom.

‘It didn’t hurt this morning.’

Lulu got three quarters of the way before she started complaining. The teenage complaint; jumbled and incoherent. I checked my bag. We had enough water to go further. Sweets to power us up Giewont. The mountain that is called a sleeping giant. He looms over Zakopane with a cross on his nose. ‘It’s not his nose,’ Lulu had said a few days before, ‘the cross is on his moustache.’

I peered closer. ‘For me it’s his nose.’

We said good-bye to my mum and Delphine. We walked through the valley and joined the uphill trail. At around one thousand metres up, Lulu started to complain again. It’s true, our legs were pulling us down. Gravity is greedy. At about 1500m it was hard to catch our breaths. Lulu had ground to motionless on the steep, stony path. I left her on a section below and considered things. I’d walked up Giewont for the first time at about eight-years-old. Essentially, I’d chased my big brothers up. I remember my lungs bursting with anoxic pride, being patted on the head and told I was a mountain goat. Now I was dying. I was never going to make it. Best way to cope? Shout at Lu.

‘Worst thing to do is to stop! You’ll lost momentum.’

She wiped the corners of her eyes. People going past nodded at her sympathetically.

It was gin-clear five minutes before we got to the top. Knees shaking, we finally stopped to eat. Never before have I enjoyed stale Polish gingerbread so much. We stood up to climb the chain section to the cross. You hike yourself up and haul. People behind us watched expectantly. Lulu went in front. I watched her negotiate her way onto the slippery rock and discovered how hard it is to hold the chains when your hands start to sweat. And suddenly the world was covered in thick fog.

I was pleased to see it was a Polish sort of mountaineering moment. Underneath the large metal jointed cross, a couple dressed in mountain gear sat and smoked. I suddenly remembered that the last time I was here, a large group of nuns were perched on these same rocks, eating sandwiches. 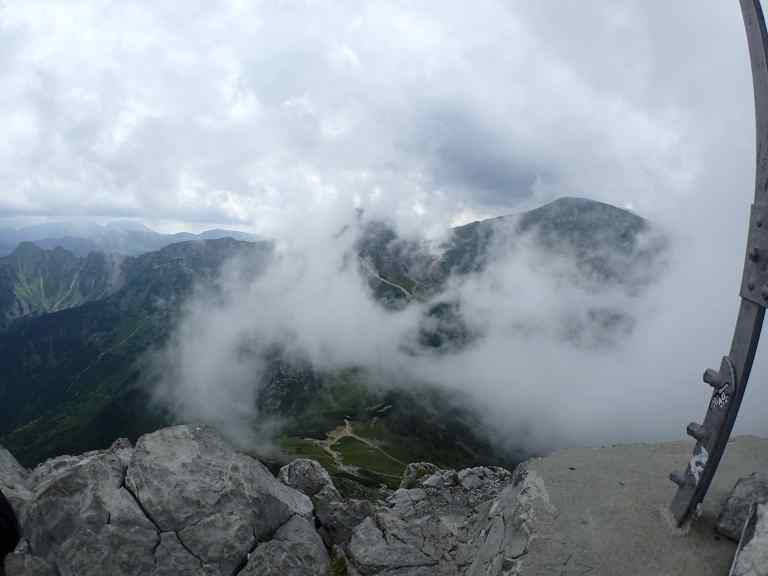 We sat for a while. Underneath the cross lay coins and pretty rosaries. We added some coins and made silent wishes. We noted the plaque at the base. ‘To Jesus Christ, from the Highlanders of Zakopane. 1900’. They’d carried the cross up themselves? I shuddered. The cloud cleared in patches. Green peaks came in and out of focus. Finally we started our way down. A large queue waited to tackle the downward chains. These rocks were just as slippery but at least this time there was no hauling. The more enthusiastic climber-types turned backwards and craned their necks as they made their way down. The realists slithered our way on our bottoms.

Lulu was taking the backwards approach. She gave me a look. ’That doesn’t really look cool.’ True. Still, if it ain’t broken.

We reached the bottom of the chains. The path began down to the valley. Low lush alpines skirted along our heads. ‘How come you’re so slow going down?’ Lulu asked, shooting off.

She skipped down the polished-by-a-million-feet igneous rock. My legs were pieces of spaghetti joined by two unfamiliar, creaking knees. I remembered looking back at my grandma as I used to come down this same path. Her enthusiastic smile always contrary to her careful steps. Turns out tables have turned. 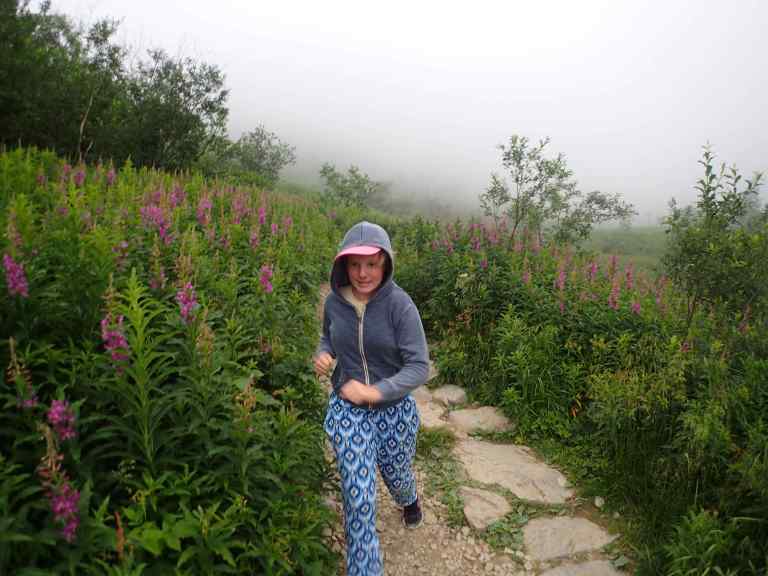