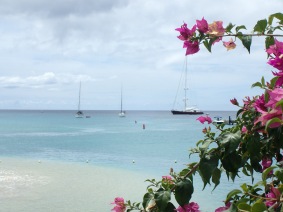 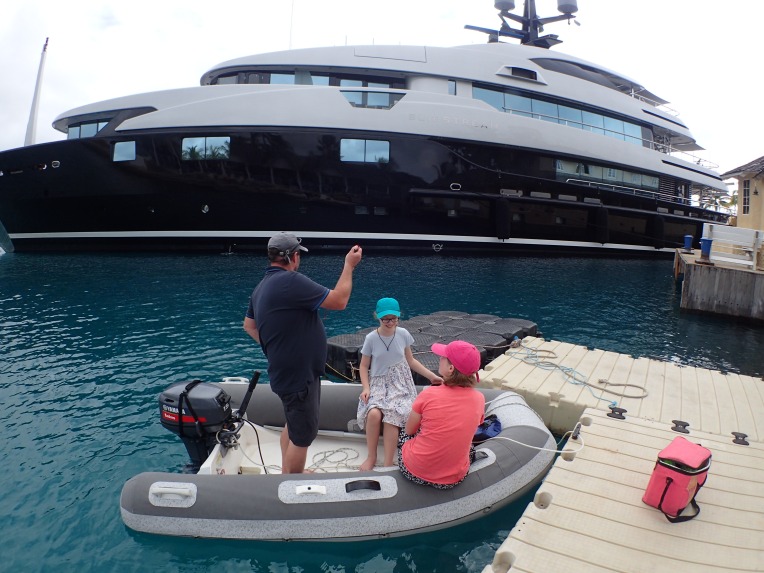 Barbados. We’ve been dreaming about Barbados. One of the only Caribbean islands not to be discovered and given a saint’s name by Columbus. Don’t get me started on Columbus. You know those people you can’t help but like, despite your best efforts not to? My feeling is that he was one of those guys. In and out of a place before he could be held responsible for anything. Even before he unwittingly began the centuries-old ‘Atlantic Triangle’ slave trade, he installed his new father-in-law on a newly discovered island near Madeira, only for the imported rabbits to wipe out the island’s natural vegetation. In a couple of years, they turned the whole island soil-brown, a colour it remained to at least 2015, when we sailed into Porto Santo’s harbour. And what do the fine people of Porto Santo do to remember this? They build a beautiful, devotional Columbus museum. Not a word of reproach. We shrugged. Who knows? Maybe they liked the island brown.

Perhaps due to its more easterly position than the rest of the Eastern Caribbean islands, Columbus missed Barbados. Instead it was named by a Portuguese explorer Pedro a Campos in 1536 after the fig trees on the island that looked like long beards. Long beards! Back in Wales this winter it looked perfect on paper. Good surfing. Tick. Dance school. Tick.

‘The thing is,’ Lulu said, driving back home from dance class in the November darkness, ‘if I stop dancing at this stage, it will be harder to get back into it when we come back this time. The moves are getting harder now. It’s not easy to step away from it anymore.’

How old is she? A logical twelve. Later that night I looked and found three listed schools of dance.

So, what else does Quest need? Our dream of travelling is painted by reality. We need infrastructure. Wi-Fi. This is because Jack has a third baby – his work. He built his business, nurtured it and though we’ve toyed with the idea, we can’t step off this planet for a year. The amazing thing is that we’re here at all.

So here we have it; our ideal place to spend a short season before the hurricane season kicks in in June, easy diving (not always as easy as you think; in some islands you can only dive with a guide), surfing, dancing, infrastructure… The answer stood staring at us two hundred miles north-east of Trinidad. Hello! It’s Barbados calling.

The strange or perhaps not (sorry to rat on my fellow yachtie comrades but wait till you see some of them) is that Barbados is not really set up for sailing yachts. This is coming from the island that had at least a hundred sailing vessels packed into its main anchorage in the 1650s when sugar production was only a decade or so old. Nowadays Barbados has its eye on other matters. A huge cruise ship port. Hotels galore, but no real marina for visiting yachts. We’d heard it was easier to check-in in the north of the island in a small, exclusive place called Port St. Charles.

With this, we steamed toward the island – a 35-hour-teeth-gritting steam from Trinidad against the wind and sea swell. We arrived at 4:30 in the afternoon, still time to follow our pilot guide’s instruction to proceed immediately to the customs dock and stay in the vessel until the authorities arrived. Delphine, whose iron stomach allows her to watch Barbie movies below while we’re sailing, looked up when I’d read this aloud. Officials boarding Quest? We got to sprucing up the inside of her, which involved hiding all our empty passage-making pot noodle tubs. Guilty, but not exactly fancy pleasures.

Jack called customs on the VHF as we approached – once, twice, no answer. Then, as we were arriving just outside the marina, we spotted a sailing boat on anchor. Like us, it had its Q flag raised, the yellow ensign you fly before you check in. We came closer. The boat belonged to our friends Geoff and Silke from Grenada! The truth is, we have the slightly dubious pleasure of knowing them more at a distance than in person. Eighteen months ago, we’d spent a lot of time in their house with our other friends who were housesitting for them while Geoff, Silke and their young kids were back in Europe preparing their own sailing boat to sail across the Atlantic.

‘Do you need to dock to check-in?’ I called out to Geoff.

‘No,’ he called back, ‘we didn’t. You can just anchor. No one is there now anyway.’ A white palace of a super yacht was anchored behind us, alongside a giant red sailing yacht.

The next morning, we lowered Edna into the water and headed into the dinghy dock. Each room in the Customs and Immigration building had a bolt-upright official sitting at their desk.

‘We’d like to check in,’ we murmured, taking off our caps. The scrutiny of a Caribbean-based official; like you’re suddenly missing your clothes. Plus, in Barbados it turns out they even have a health officer to inspect you.

I began to tick through the form. ‘Have you or any crew on-board your vessel ever had the plague?’ one of the first questions read.

I looked up from the question with a smile. No smile came back from the health officer. I quickly wiped it from my face. That’ll be a no then.

As we were filling out the crew list, Delphine headed towards the window. The huge, 60m super yacht, Slipstream was tied up just outside. ‘Look,’ Delphine said, ‘I can see a turtle!’ Sure enough, just under the window a sea turtle was gambolling between the super yacht and the pier. It was a pinch yourself moment.

‘I wish you a very warm welcome to Barbados,’ the health official said, ‘now proceed to customs.’

We followed her instruction. As the customs officer processed our forms, she began to sing an Adele song under her breath. The girls listened for a moment and started to giggle under their breaths. They were obviously setting each other off when their giggling reached an uncontrollable edge.

I shot them pointed looks. ‘The girls haven’t heard many customs officers sing Adele,’ I explained to the lady.

She adjusted her dark suit jacket. ‘My husband thinks I should just put everyone out of their misery and stop.’

Our eyes widened. ‘No, you’re great!’ we all exclaimed. ‘Simon Cowell is always visiting Barbados, maybe you should get in touch.’

She threw her head back and laughed. ‘You see that yacht, Slipstream. Simon Cowell is always on it. He comes almost every week. And you know what? He is very nice. Always very polite and generous with his time.’

We shook our heads. It was another pinch yourself moment. Meanwhile, the sun was shining outside and the water shone a cyan blue.

‘You know,’ she said, ‘as far as I’m concerned, you can stay in Barbados as long as you like.’