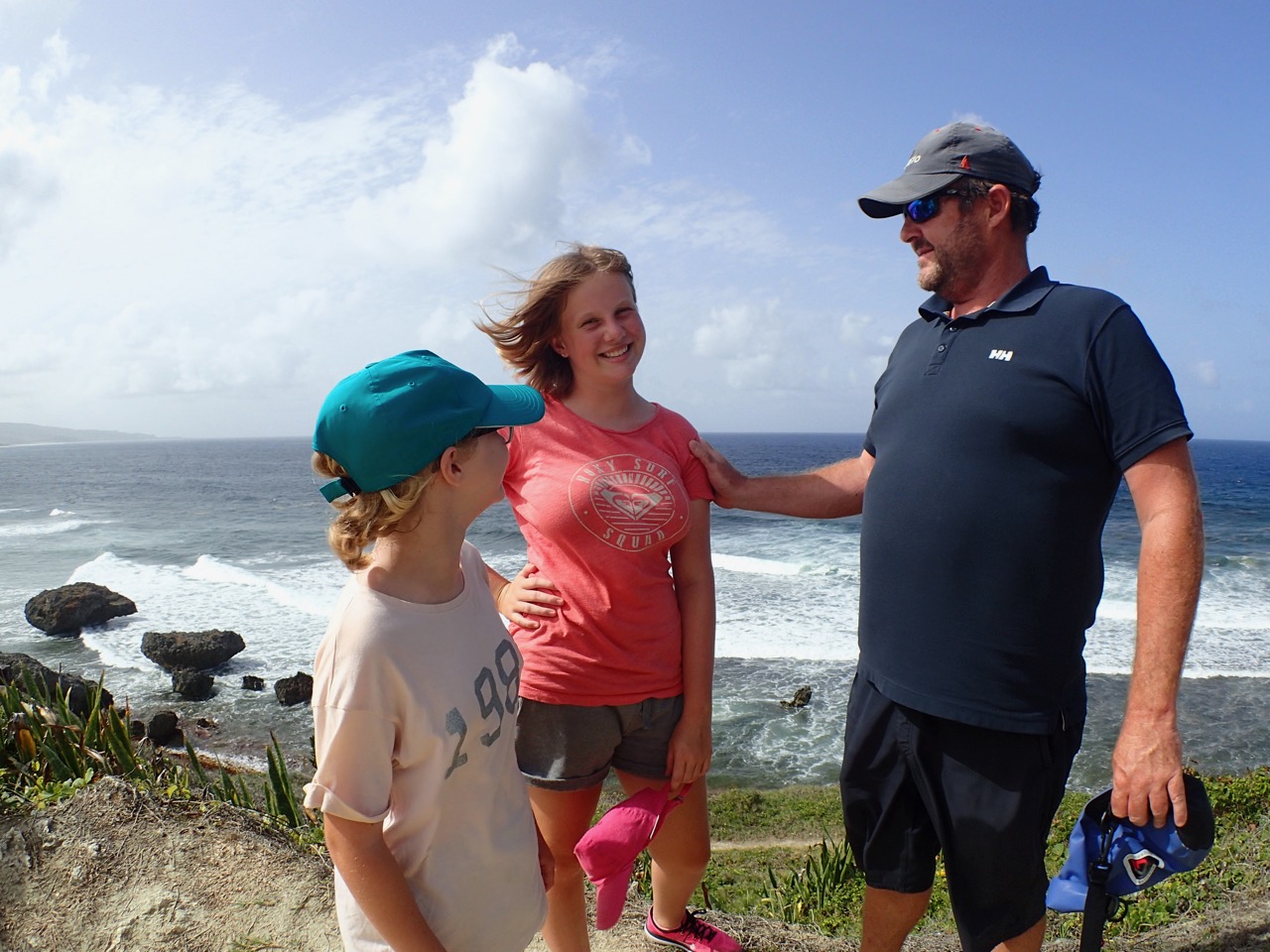 Yesterday we went to the Andromeda Botanical Gardens. It’s just near the village of Bathsheba, famous for its surf break; the Soup Bowl. Soup? It’s my favourite dish. Being half-Polish means I grew up on soup. I make it now, even in the Caribbean, though not with the same frequency that my grandmother did. This was because my grandfather insisted on soup before every meal. I remember it well. Despotic-sounding but tempered by his softness. After all, he didn’t care what it tasted like, nor the meal that followed, just that we had soup first. Having lived through two world wars, it seemed soup was his steady. For me, it was clear as broth. A place called Soup Bowl? I was there.

On the way, the Andromeda Gardens were beautiful, full of scent and colour. A rebellious-looking heron skulked around the goldfish pond. Ginger and frangipani bloomed alongside a lofty selection of palms, including a mature specimen of the tropical equivalent of the redwood – the Royal Palm. We passed under an enormous bearded fig tree; the tree that gave Barbados its name before strolling under flowering jade vine. The tropical lushness started to make us feel heady. Did someone add something the soil to make its lunate flowers that crazy green colour? Like they do with the blue hydrangea at home, adding acid to the soil? No, apparently not. It just is that colour. We passed through huge hanging heliconias but failed to spot any attending hummingbirds, even though we waited patiently in the hummingbird garden. A green monkey did make an appearance, this non-native, old-world monkey with a tail so long and lustrously mobile, it would make a tree branch green with envy. Perhaps this explains the green in green monkey I thought. It looked at us disdainfully as if sizing up our cheese and tomato sandwiches before sidling off into the distance. This was wildlife Barbados.

It was surprising, taking the blue National Transport Bus there. It was firstly surprising that the bus even came in the end. We almost gave up waiting but rallied hope when we saw that the locals brought their own fold-up chairs. Every one of these National Transport buses is supposed to leave Bridgetown on the hour. I’ve realised that means that if you get ready to go on the hour, the bus will be ready sometime during that hour. Clever really. This way you’ll never miss it. For someone who hates being late, this schedule suits me well. The locals made no fuss of the uncertain schedule at all. The bus station was a place to catch up on news and well, when you got tired, you can pull out your camping chair and take a load off.

The woman in front of us was getting on in age. She had some heavy bags, so when the big blue bus finally jolted and sighed into our gate, Jack offered to help her carry them.

‘Bring it,’ she barked as she began to move forward. ‘Bring it!’

Jack moved fast in surprise. Watching this was an unexpected treat. Jack wasn’t going to comment, not in the way he might have at home if a strange old woman started bossing him. Here, dressed in flowery patterns and often sporting elaborate straw hats, these women come across as pretty formidable. I even got caught in an elderly lady’s fart cloud the other day in the supermarket check-out. I was pretty sure it was her because until then, I hadn’t seen one whiff of a smile out of her. Until I was hit, good and proper without the ability to move and the woman’s mouth began to twitch and dance around. She shuffled forwards. Ok, I thought. I can live with it.

Our position as yachties around Bridgetown does give us a sort of ambassadorial edge. There’s not many of us here. The supermarket we go to – Jordans by the bus station, isn’t in the suburbs. It doesn’t have marmite for sale, coffee that isn’t instant, and if you want to pay by card, you have to leave the check-out and go to one of two centrally-located card machines. I’ve noticed not many people pay for their shopping by card. They get wads of Barbadian cash out (that’s how expensive the food is here) and start counting. There’s a line of men too at the front door – taxi drivers, men who seem to be waiting for their wives, some plain-clothed employees in there. All eyes are clocking us as we go in.

We’re clocked on the inside too. Lulu and Delphine; both well known for their ability to over show emotions both good and bad in a supermarket were approached by a well-meaning rasta and told to relax. Not to get so worked up, he told them. Nothing like having the only tween age brats in the store. Jack shook his hand. Actually, the rasta ended up telling Lulu only because Delphine had performed one of her miraculously innocent smiles and disappeared from the conversation. In her sudden isolation, poor Lulu had agreed whole-heartedly with him and then seethed afterwards.

‘He’s on my list of people to die,’ she announced on the way back to Edna.

I sighed in the midday heat. ‘It’s an unfortunate fact Lu that you’re the oldest one with the biggest mouth. This may not bode well for you.’

Jack nodded in agreement. ‘I’ve been telling you two to stop having public disagreements for years,’ He shifted the heavy shopping bags in his hands. ‘But if insist on doing it here, it’s not going to be tolerated.’

‘Well, no one would notice in Morrisons at home,’ Lulu spat. She was approaching furious.

‘Well, I hate being different.’

‘Me too,’ Delphine chipped in. I passed her a look. She was coming out of hiding? I couldn’t fault her for instinct.

There was another surprising thing about our bus ride to Bathsheba. It was how much the island is still worked for sugar cane. Waves of it grew like bushy wheat. There was more sugar cane than we’ve seen on any of our other island travels, through Antigua, St. Lucia or Grenada for example. It was a peculiar twist. Barbados has come across to us as the most modern of the English-speaking Caribbean islands. Certainly it’s the most populous and probably the most advanced for infrastructure. This meant driving past the sugar cane gave me the time-warp shiver. Kind of like finding the culprit.

For centuries, Barbados fed the UK with sugar both through the insatiable appetites of the British people and by providing economic strength. Imagine that until Caribbean sugar cane was available, honey was the only comparable sweetener. The British sweet tooth for sugar seemed to know no bounds. Sugar; the cause of all evil? I’m a sugar addict myself. Coffee, cakes, brownies, chocolate. If I don’t have sugar by four pm, I know about it.

When sugar production began in Barbados in the mid-1600s, it was the most technologically advanced agricultural method of its time. It required intimate knowledge at all stages of its growth, cutting and processing. Add to the story of shipping the heavy equipment to Barbados across the Atlantic Ocean and working in a hot climate where tropical diseases like yellow fever were rife. Nothing was a success until barrels were managed to be sent to the UK on a large scale. Sugar was the dirty secret of its time. No surprise that human slavery was justified on the basis of supply and demand. Everyone wanted it and yet turned to a blind eye to how it was produced. Boy, does history repeat itself.

Sorry, I could go on for days! After we visited Andromeda Gardens, we walked down to the Atlantic village of Bathsheba. Site of this famous Soup Bowl; the favourite surfing spot for surfing legends like Kelly Slater.

‘Where is it?’ Lulu asked, squinting over the water. Atlantic rollers came in steadily as far as we could see, past large boulders that looked as if they’d been dropped by careless giants. The village was as sleepy as you’d imagine on a late Tuesday afternoon. We looked around, unsure and sat on a neat expanse of grass, smelling the air. Brown sargassum weed, which since 2011 has become an increasing problem for Caribbean waters, butted against the shore. The girls went to try their hands at climbing bendy palms before the bus back to Bridgetown at 5pm.

Now, the Ormerod family like a day trip in theory. Take it to a certainty though and things change. Before we even leave, difficulties real or imagined are enthusiastically turned over. This includes the struggle of getting there not to mention the challenge of getting back – until it feels that dragging three metal pipes out of Quest’s hatches might be easier. So, imagine the look on these three Ormerod faces when we discovered we’d missed the last bus to Bridgetown.

‘There’s no more buses after 5pm?’

The helpful community officer shook her head. Of course, it would be Barbados where a community officer was standing in the bus stop. This island just loves a sense of order. We weren’t complaining either. Her VHF radio attached to her belt reported back in a thick Bajan accent, ‘Bus to Speightstown approaching.’ Our ears pricked. Speightstown is Barbados’ second town. From here we’d easily catch a connection to Bridgetown. The blue bus pulled up and after thanking her, we jumped on.

The Speightstown bus didn’t return through the sugar cane fields. Instead it followed the Atlantic coast. A brushy expanse of sand dunes stretched north where we passed large pastel-coloured houses with windswept verandas before turning inland. Then the bus passed through comfortable hamlets with horse paddocks and a number of large, immaculate-looking schools. The sun was becoming golden. Even in the early evening, students were still milling outside under the shade of tall trees. Finally, we alighted at Speightstown and crossed the road, getting straight on a smaller, yellow bus. We smiled slightly at each other. Not bad so far.

The next part of our journey followed the west coast road. Calm waters and luxurious resorts line this part of the island. Sandy Lane. Simon Cowell-land. We passed Cartier and Gucci and shook our heads at the sight. It was hitting six pm, rush hour. Passengers were now standing in the aisles. Reggae music pulsed from the bus’s speakers. We stopped at the posh shopping complex. A fellow British family with three blond girls about our girls’ age got on the bus. Brushed in sand and tainted with sun burn, these girls stood and giggled. We carried on and after three stops they got off again.

Half-an-hour later and we finally arrived into a historic part of Bridgetown. The buildings looked like old cookies about to crumble. We got off and headed toward the more familiar centre of town.

‘Did you see those tourists?’ Lulu said.

Since getting off the bus I’d been distracted, looking for bread to buy. Otherwise no breakfast tomorrow. I crossed my fingers. Hopefully that lady who parked herself in a tent near Edna in the inner basin in the afternoons would be there.

‘You could really tell they weren’t from here,’ Lulu continued. I started paying attention and passed her a glance. It’s been a while since we’ve seen kids that looked like our girls.

Lulu rolled her eyes. ‘I mean they were way too happy.  Did you see how they were giggling? Typical tourists.’ 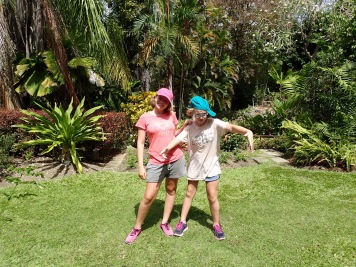 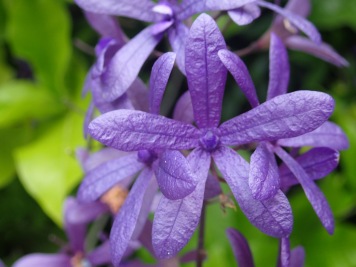 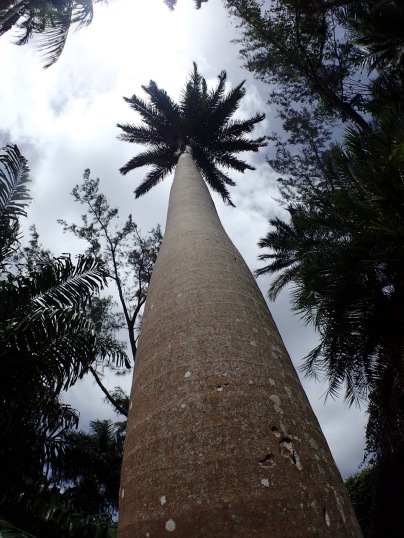 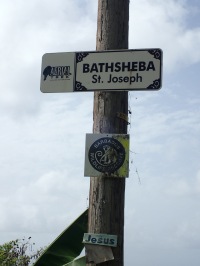