The first time we went to Trini we discovered doubles. Spoonfuls of channa in fluffy flatbreads; doubles may not sound like much until you eat them. Sweet and tangy and like all things in Trinidad; spicy on request. Next time we came we found shark’n’bake on the north coast. Beachside sandwich that the whole nation adores. You don’t have to have shark either if you don’t want to. The third time it was ice cream. Creamy but not too sweet, J’n’J ice cream is homemade in Tobago. Flavours include cherry coconut and pumpkin. What did we find this time? This time it was chow. Worried you’re not getting your 5-a-day? Worry not longer. Chow is mango or pineapple sliced and marinated with salt and pepper, garlic and a chopped, green herb called chadon beni. Sweet and salty and of course hot if you want it sprinkled with pepper sauce. 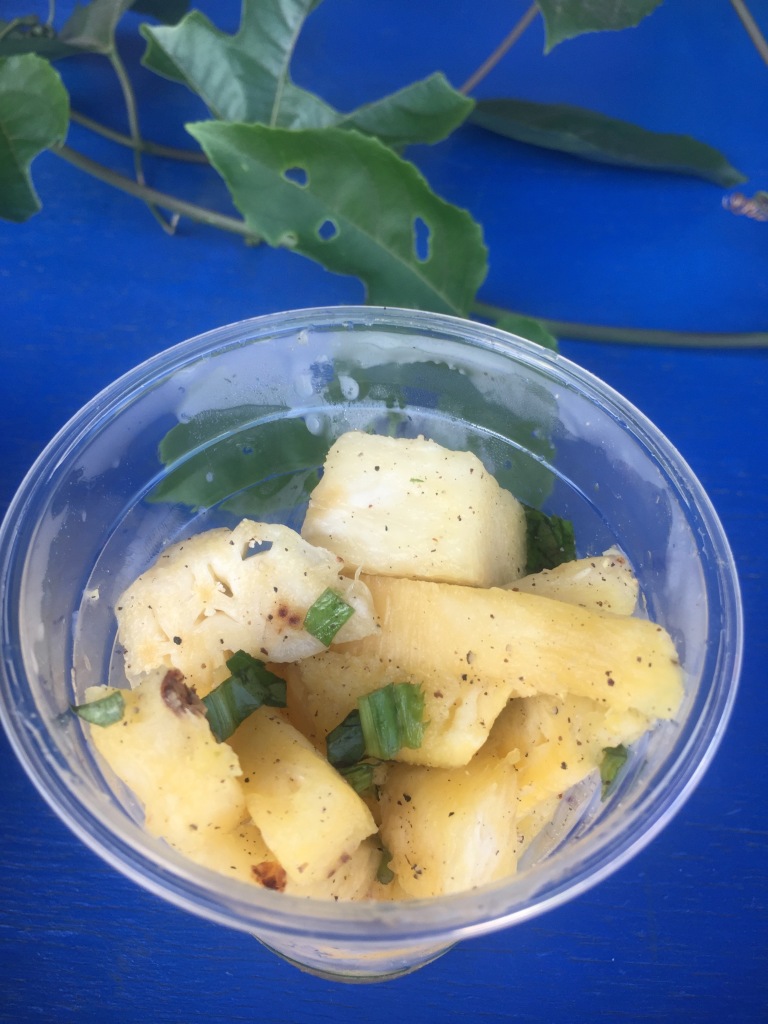 Chow is our latest experience of Trinidad. It’s another thing unique among the rest of the Eastern Caribbean. We discovered that Bajans called Trinidadians ‘Tricky-dadians’. Ha! Is it a simple play on words? We couldn’t comment of course, but it does seem that Trinidad plays with geography. This is a country that is almost South America with jungle forests, towering peaks, savannahs and deep cuts of river. Then at the last minute, it snatches itself back into island status. From this stance, while serving food that reflects its sense of special isolation, Trinidad is also a culture that pats itself on the back. I’ve absolutely never met a country that enjoys itself so much. Sure, Americans are proud of their constitutional values. The British covet their own traditions, different for each of its social spheres as if they’re a cake with different flavoured layers. The French hate change (if it ain’t broke, don’t fix it Monsieur), the Poles worship their willingness to suffer for a worthy cause. Australians both tame and respect nature, an impressive thing to do together while the Spanish go all historically proper with long, complicated names but love to giggle. Can the defining nature of cultures be the way they can be summed up into handy synopses? Probably not. But it’s so much fun!

This time, we smelled Trinidad before we saw her towering silhouette. This was mostly because it was dark by the time we arrived. We didn’t plan to arrive at night though. We forgot about the equatorial current. It had pushed us to Barbados and now it was fighting us going home.

‘I think we’ll have an extra 60-80 miles to make up for it,’ Jack said after carefully examining the Navionics app on his phone.

Aha. If we’d had our plotter on, we would have realised this much sooner. Unfortunately, as well as George’s unpredictability, we had another mechanical victim this season; our navigation plotter. Harry Plotter. Harry normally would have sorted things out for us navigation-wise. Now the condensation inside of him was sparkling merrily at us in the sunshine. He’s been on Quest for her whole lifespan; ten years up in the cockpit, a computer brain permanently outside in the elements. Perhaps not so surprising that he’s given up the ghost. So, another thing to fix on Quest? Things have changed. Not many people are re-investing in plotters when similar navigation apps exist on phones and iPads. Hmm. We’re not so sure. A plotter is another crew member and particularly handy in coastal environments. When you’re about to anchor, the plotter is much more accessible to look at than a phone in your hand.

Overall, Trini is busy. Oil tankers, gas platforms; this constant fossil fuel industry gives us a strong clue why Trini are so pleased with themselves. Fuel is cheap and fossil fuel supplies are abundant. Fishing around Trinidad is also blessed. The pesky equatorial current we’d fought with meets the Caribbean Sea out here. This mixing and the nutrients flowing from the nearby Orinoco River in Venezuela combine to make critter capture a productive life. On the way to Trini’s NW trip, Jack and I pushed Quest through a fleet of blinking fishing vessels.

During the day, we’d seen many types of boats. White-coloured Venezuelan boats remind us of New Orleans steam boats without the paddles. They are a strange sight in the lumpy, electric-blue open sea. Earlier, fifty miles off the coast of Tobago, another boat had changed course and come our way. We’d watched it steam or rather bob towards our stern and gulped. This is always a little disconcerting. Three years ago, on the outer edge of the Bay of Biscay, a sailboat came right up to us. It was the middle of the night and my hair stood up on my arms. Anything could happen out here. In fact, it turned out to be a retired Dutch lady who wanted to say hello without the usual sense of personal space. Now, the fishing boat too made its way right to our stern. Just as Jack began to throw looks at the locker holding our emergency flare gun, a man came out of the cockpit. He waved at us. Huge and happy wave. Typical.

In order to get to the yachting centre of Trinidad, Chaguaramas (try saying that after sailing all night), you have to sail through a narrow channel called the Dragon’s Mouth. It’s narrow but busy. You’d think that there’d be some lights in it. At least one. Anyone? At midnight, Jack held up his phone – and according to Navionics, that little rocky outcrop in the middle of the channel should be lit. I had a look. The dragon’s tooth. I frowned at the phone. It should be lit. But as we sailed into where we were sure the channel was, it was dark. Except for the phone.

The north coast of Trini is jungle. It’s a world away from the capital Port of Spain behind it. Luckily, we had a glimpse halfway through the inky channel. We saw the first light; an anchored ship, then another, then a whole gas platform. Ten minutes later, we slipped into the mooring field like burglars. A year ago, I’d picked up a mooring buoy in Chaguaramas on a windy, difficult day. Quest’s mooring gaff went into the water. Disaster! Without the mooring gaff, we’d never be able to hook onto the buoy. I quickly stripped down to my knickers and jumped in. Now, you should know that Chaguaramas is a watery dead-end and all sorts of rubbish end up floating in the water. Fridges, dead fish, the odd turd. And me, it turned out on my birthday. I’d spent the rest of my special day de-contaminating myself. This time, I didn’t need to remove a single piece of clothing. We attached Quest without a hiccup. 1 am. We were here.