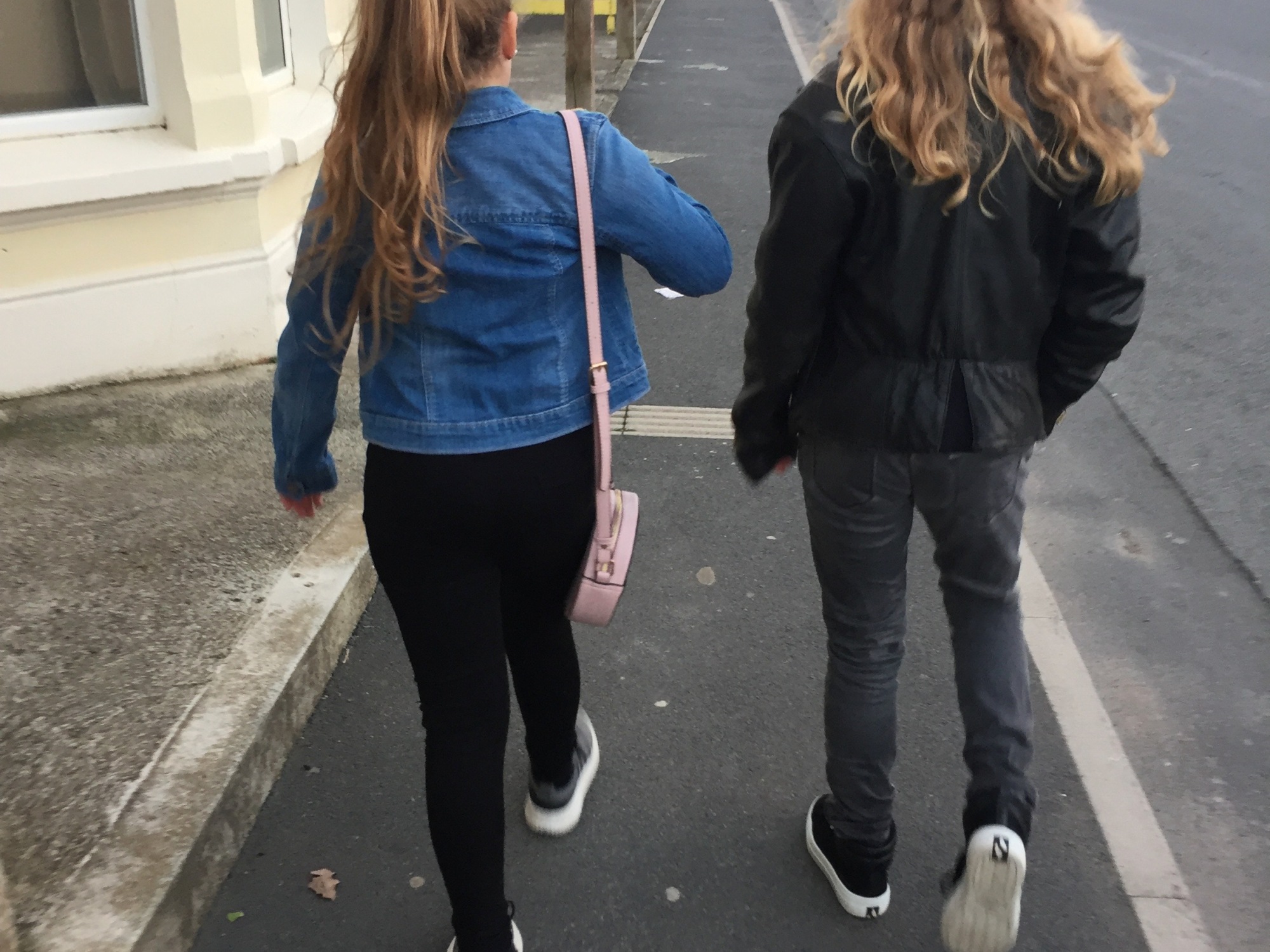 ‘You’re going to be a lawyer Lucia, too busy to deal with anyone,’ Aaliyah says to Lulu in the back seat as I drive her home. She’d called shotgun before we even got to the car. She turns her back on Lulu and faces me. ‘Delph is going to run a toy store. But I think some of the Barbies she’ll steal away in her secret collection. Hannah, you’re still going to be working on your book. “Still editing,” you’ll say. And Jack… well obviously he’s just going to just be interested in cake. “Give me cake!” he’ll shout. That’s it. I can see the future.’

Aaliyah is Delph’s best friend from school since they were five or so. We’ve known from the beginning that she was, well a character. In fact, one of the first times she came round to our house, Jack named her ‘Polly Pocket’. This is because she was (and still is) on the pint side of the height-sizing scale. In good-intentioned friendliness Jack asked her a series of questions. ‘What’s your favourite food?’, ‘Do you like school?’… you know, the usual stuff you’d ask a seven-year old. I’m not sure at which number, Aaliyah turned to him with a slightly crazed look on her face.

‘Too many questions!’ she yelled.

Ok. That was surprising. I mean, she did have a point. But to be able to shout it out with such confidence? At that moment, Polly Pocket for us was truly born. We felt we knew this child.

For the next two years, living on Quest, we sent Aaliyah postcards from different countries. We didn’t really consider that she missed Delphine much. Until we came back and Delphine went to visit her old primary school that is. Boy oh boy was Aaliyah weeping for the arrival of her friend. It made me bubble up in the playground.. and I’m usually the hard-as-hammers type. Later on, visiting Aaliyah and her mum, Aaliyah brought down her self-styled Delphine box from her bedroom. She’d put all her Delphine mementos inside, including the wrapper of a Grenadian chocolate bar we’d sent her from the Caribbean.

I sat back. Ok, I knew that Aaliyah didn’t like questions. I never realised Delphine had such a loyal friend though. And, judging by the empty wrapper, one that liked chocolate too.

Since then, when we’re home, Aaliyah has been a pretty solid fixture in our lives.

‘Aaliyah,’ we took turns saying in the summer, ‘You might want to go home and brush your teeth. Look around your own house for a couple of days.’

The thing is though, besides the occasionally questionable dental hygiene, Aaliyah is no trouble. I mean, trust Delph to make best friends with a Welsh girl with a Caribbean name. Plus, she and Delphine play for a record number of hours. They play like they’re trying to break a record in playing. And in the summer, Borth came into its own. It was playing and swimming in the sea, eating, playing and swimming again. Then a bit of jumping on the trampoline.

Now in the autumn, we’ve recently bought a static caravan for Welsh-style extra-space living. And we’re hoping to add a couple of bedrooms to our bungalow next spring, so the caravan will probably replace our home for a little while. In the meantime, those two can’t get enough of it. It is slightly disconcerting though, when I’m walking past to hang the washing and I hear Aaliyah shouting,

‘I’ve got four children and no job! So Thalia, this means you’re going to need to go out and earn some extra money.’

At what point did these two reject the Hollywood-stars-in-their-trailers game I wonder, and instead go for the trailer-trash role-play? And what is Lulu doing during this school downtime? The answer is; mostly she’s busy with own friends from her old school. She got independent this summer, going to town on her own and was happier than a lottery winner meeting new friends too. When she’s home, she does dip in and out of the Delphine-and-Aaliyah show but, to be honest, I’m not sure those two even notice her. Except when she joins their running-a-dance-school game. I know this because Aaliyah comes into the kitchen and announces disparagingly, ‘Lulu is trying to run a strip dance class again. Can you talk to her? She won’t listen when I tell her it’s inappropriate.’

I sigh. Here I was thinking I was going to have a quiet half-hour. That’s the only thing I’d say about having a third kid around; it changes the dynamic between your own kids. When we’re living on Quest, my girls are close; both by physically sharing a small space and also through forced companionship. Ha! Nothing wrong with a bit of forced sibling companionship… I hope. The experiment continues. When we’re home though, outside influences flow into our lives more easily. Friendships being a force you don’t want to stop. Our gifts from the cosmos. 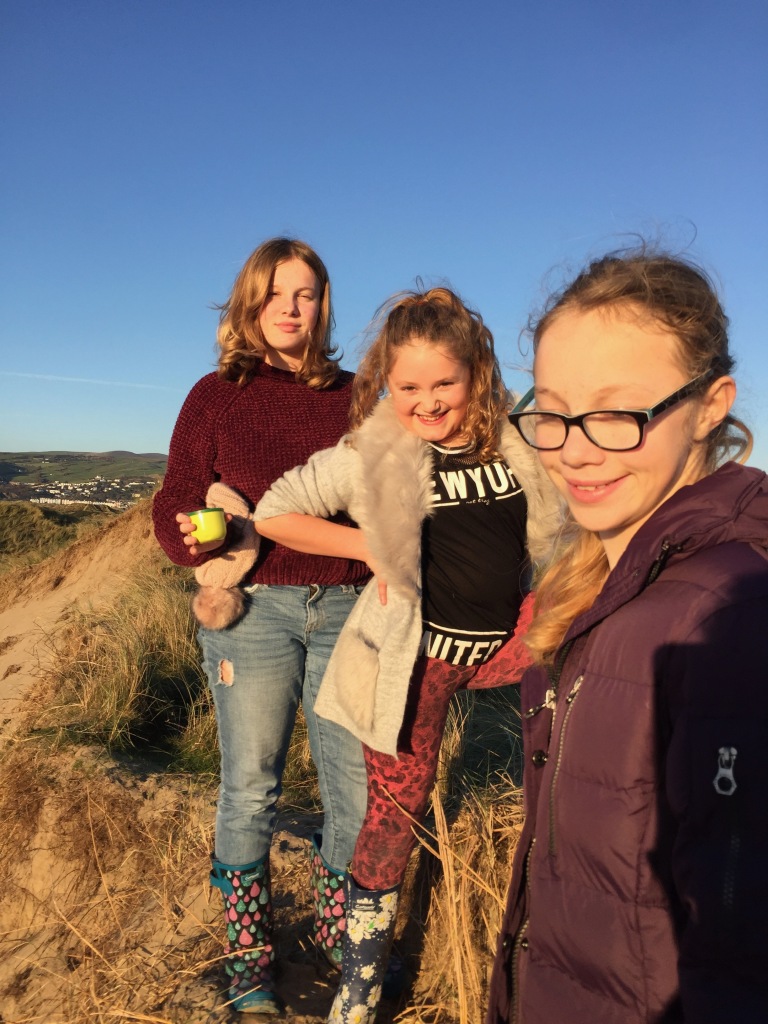