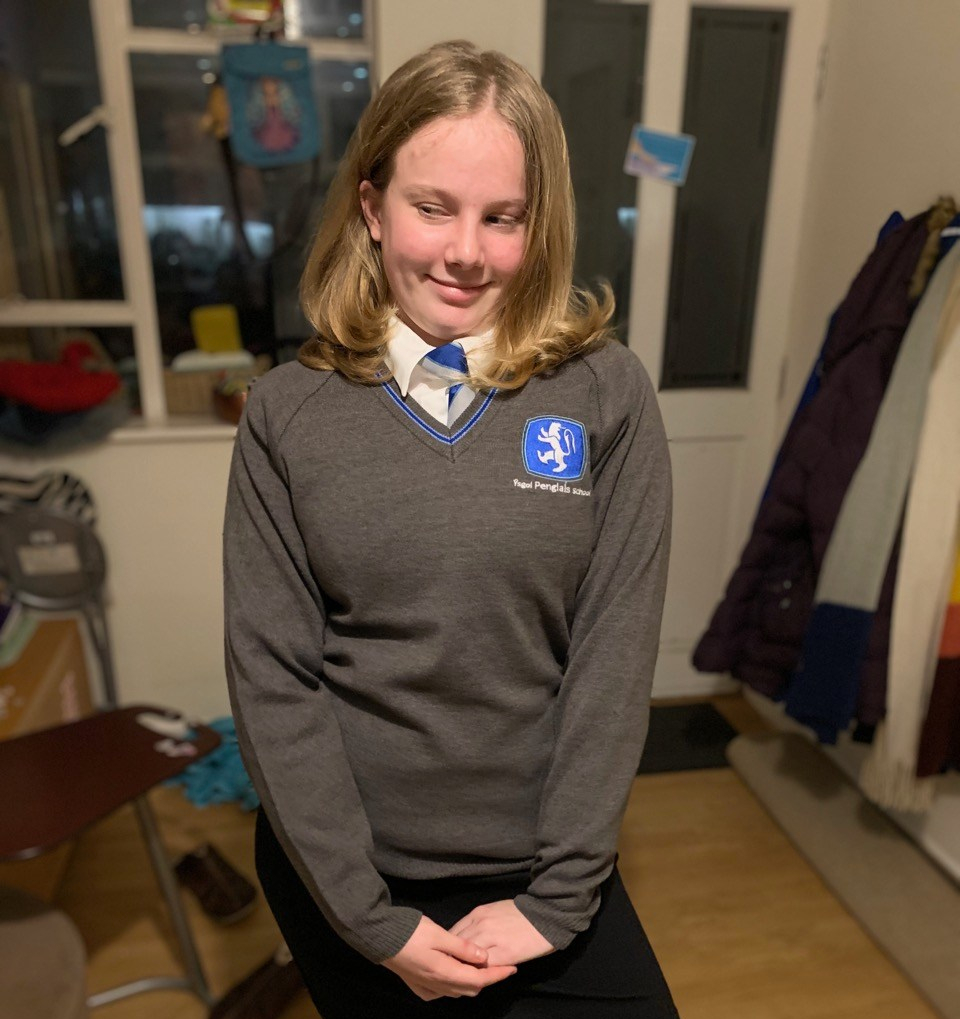 ‘I’m going back to school after three-and-a-half years! Woohoo!’

Lulu’s grin was tropical, even if the setting wasn’t. She danced around our Borth kitchen in her new school uniform.

I had to admit: she looked good. Grey and blue striped tie. Fierce-looking logo printed on her new grey jumper. Marks and Sparks skirt. Warm winter tights. We’d even bought black shoes – with no colour variation in the stitching. Studying the uniform protocol during Christmas made that possible.

I found myself smiling along. Her joy was proper warm. ‘You did pretty well Lu. Plus if you’d have stayed at InterHigh, you’d have had a pile of homework to do over Christmas.’

Her fingers pointed into pistols at the ceiling, ‘Even more woohoo!’

We’d all agreed she needed to try it. A local comprehensive school, struggling alongside many schools to cope with the never-ending series of funding cuts. This isn’t Lu’s story though. She’s done everything we’ve asked her to do. Still she says she feels at a window looking in. A poorly funded, struggling-to-perform school and Lulu needs to go there? Turns out this kid wants the other side of the window.

I called InterHigh after Lulu finished her school trial. She liked it and Penglais decided to put her in the top sets for her year. The decision was made. I don’t mean to brag about this. I don’t really care where she is academically. What really carries meaning for our particular situation is, for three-and-a-half years, we didn’t know where this kid was. She’d left mainstream education as a pretty average, primary-age student. I boat-schooled her for the first year, but then she did InterHigh for the next two-and-a-half years. InterHigh do baseline assessments but they don’t typically publish the results. They have mixed-ability classes too. No sets.

Part of our concern about Penglais was where she would go. I could convince myself that this matter was for her sake.. After all, the lower sets tend to be more disruptive. Ha! Nothing to do with my sense of shame. Right? I mean, what if I’d done my kid wrong?

The truth is that my ego is about as welcome here as landfill. After all, Lulu might brawl with the boys after hanging out with her father for 300% longer than the average kid does, but she is currently in the top maths set. I was never, ever in the top maths set. Am I trying to re-live my youth through my children again? Nooooo. No way. Dammit. Caught again. Piss off ego.

Meanwhile, InterHigh were awesome about her leaving early. ‘Please tell Lucia to enjoy her mainstream school experience,’ they graciously wrote. Thank goodness too, that they dropped the word ‘mainstream’ into the conversation. Before that, I kept calling it ‘real school’. Didn’t sound so good over the phone. The pause over at InterHigh made glue feel watery in comparison. Like what has she been doing all this time? Pretend school?

Lastly, there’s been a list of things to run through with Lulu herself. To make it as clear as possible, we’ve condensed them into five main points over Christmas. They go like this:

Good luck, Loopy Lu. The rest we can leave behind. You go kick some academic ass.