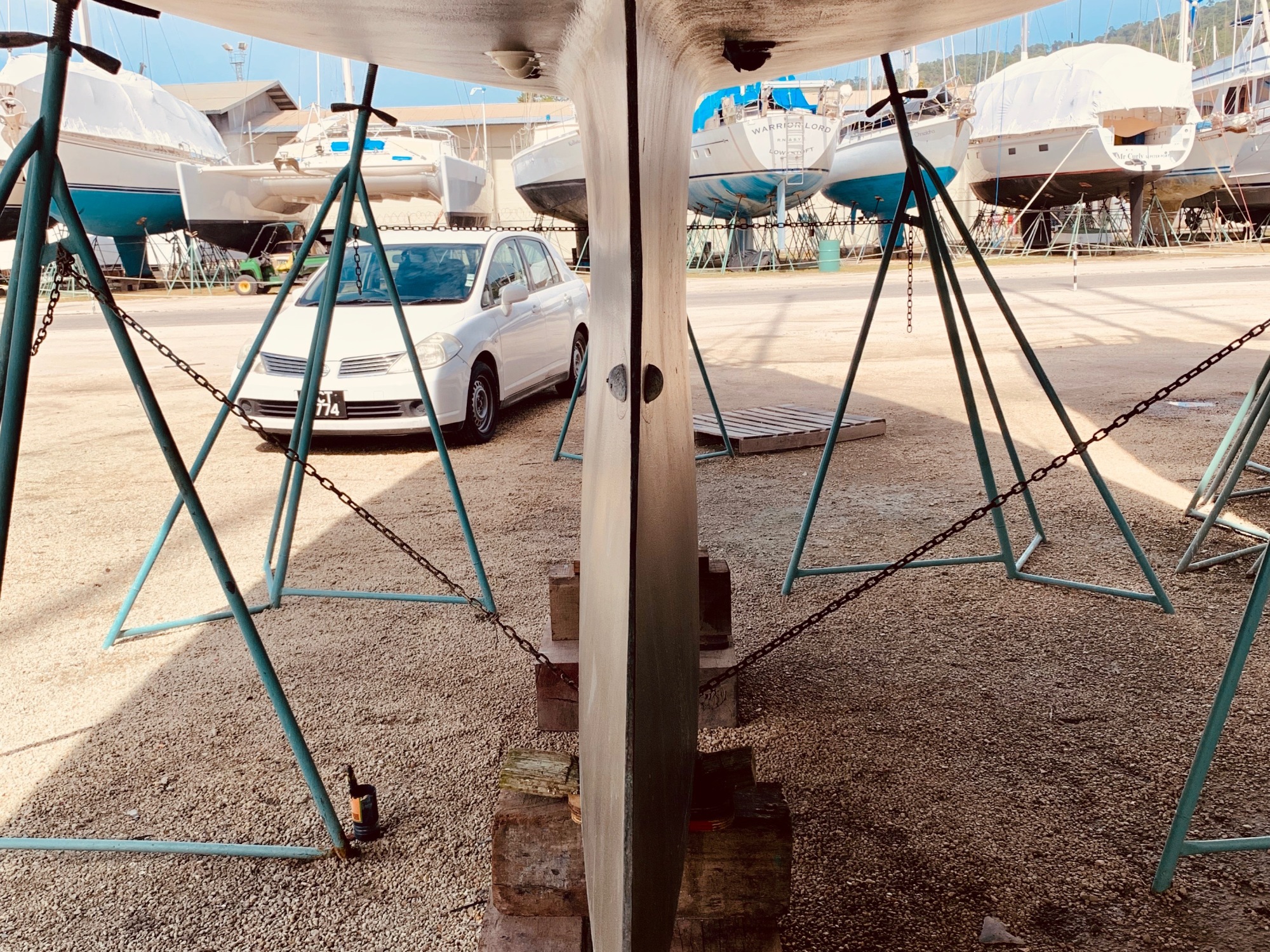 The day started a a bit different as planned. Our splash day was scheduled for Tuesday. Over the weekend, we got ready. I stacked the books on the shelves as if we were going sailing. I stack them up against the ceiling headliner, so when we heel over they are held in place. Well, mostly. Excessive heeling and crunching, forward cabin waves still make my books spread out all over the floor. It’s like a fight in a library.

Then I tackled Delph’s room. Two weeks in her cabin, playing with all her stuff – I found an overcrowded treasury in there! I culled and I sorted – all while Delph waited outside as an unwilling exile. Finally now, there’s room. There’s space! You could even call it roomy… no, actually that’s a bit far. But at least you can see a surface or two. Delphine went straight back inside.

Jack tackled the outside. The outside has always been Jack’s domain. A hose and a couple of brushes and he’s away with the swabbing. He even found a telescopic brush yesterday in his cupboard he didn’t know he had. He says the cleaning helps him remember all the systems; the lines and pulleys, the blocks and metal bits. Hosing and remembering things.

Jobs done. Then Jack noticed that the pontoon we’re supposed to use in Peakes little marina still has a boat attached to it. Huh. He went to the boatyard office first thing Monday morning to clear it with the ladies. They tried to make it sound good, but Jack sniffed it out. In the end, they asked if we could delay our splash – to the following week.

I think this is ok. After all, we’re still in the height of hurricane season. We’re still waiting for our batteries, en route from Miami. Nothing’s going on. School, beach and the mall. Just living on Quest again for this length of time is a luxury.

So, all sorted. Jack went off to buy doubles – the best breakfast in the world. As we do most mornings. Chickpeas in a tangy sauce wrapped around homemade wraps. We love them so much, we usually have two each. Jack came back aboard, sat down at the saloon table and bit into one. Bang!

He went pale. ‘I’ve cracked my tooth. My back molar. All the way down.’

We stared at him. How was that possible? Eating doubles is like the equivalent to eating a mashed potato.

We later found it was probably a little piece of mango stone. Doubles contain homemade mango chutney, so little pieces of mango stone can sometimes lurk inside. I remembered the Caribbean Smiles Dentist being close to the supermarket, Massy’s. Jack downed some painkillers and set off. He came back a number of hours later – with one less tooth, a pack of antibiotics, some stitches in his mouth and instructions to return in a week’s time.

I think it’s fair enough to say this week has started differently to how we expected it. The tooth fairy came – but not really in the normal way. How things can change on the turn of a penny! This is probably a good thing to remember.

2 thoughts on “The Tooth Fairy”