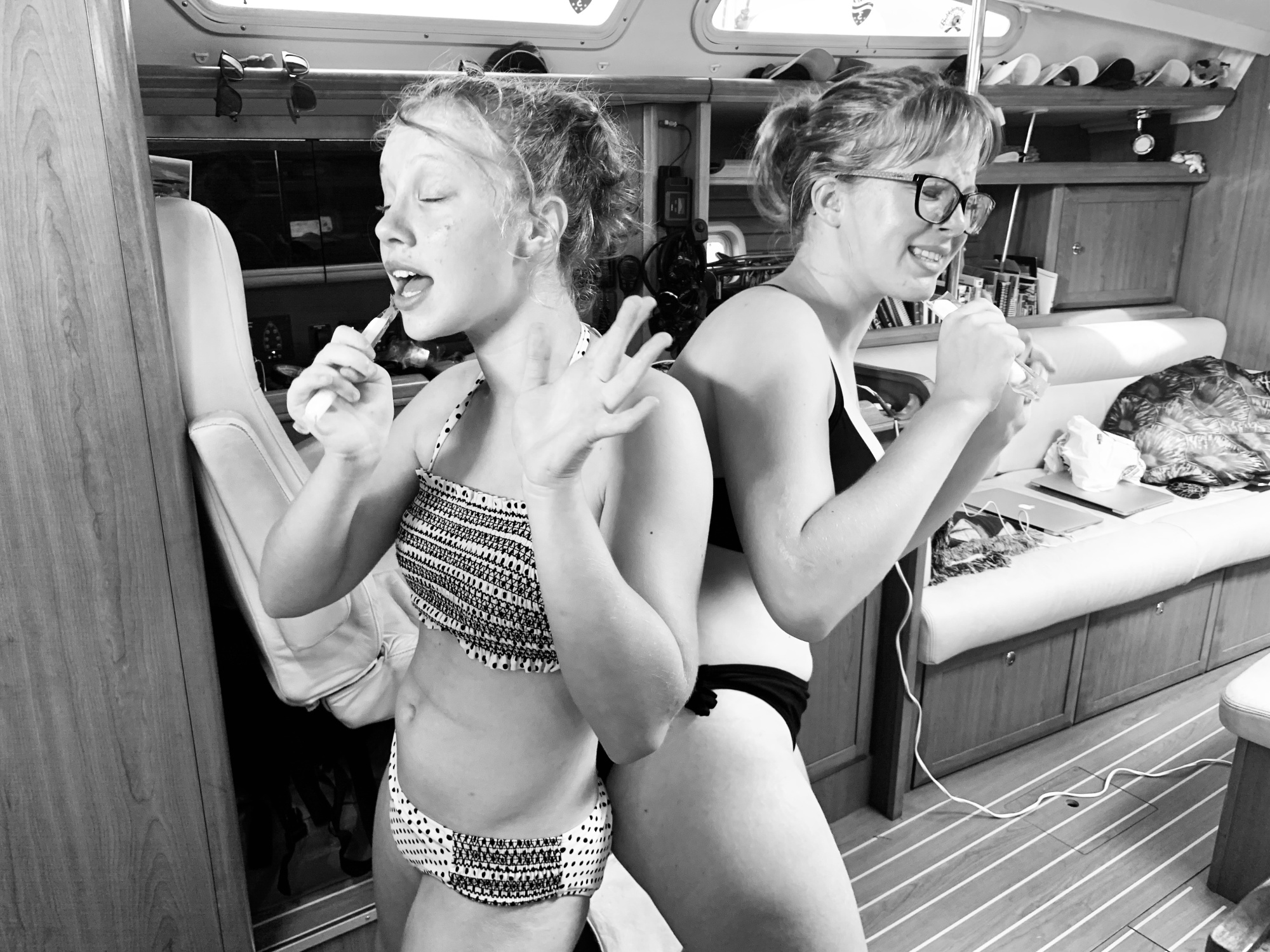 The first experience we had visiting a French island was the summer of 2014. We’d sailed from Milford Haven, crossed the English Channel and arrived in Brittany. The wind had died. We were motoring down the coast, tired but happy when we noticed a little archipelago seaward-side.

I reached for the pilotage and read. These tiny islands were considered the Caribbean of France: Iles de Glénan. Ok, info complete. Quest’s nose duly turned and an hour later, we anchored.

It was beautiful. Far enough from the mainland to feel lonely. Quiet and quaint. We discovered the island we’d parked next to was once a prison island. And there was no natural source of freshwater, except for rainfall. Urghh. Every prison island we’ve ever visited with no water was once a brutal hole. Still, I reasoned. It wasn’t a hole anymore. This would be just the place to kickback and experience the French summer.

An hour later, some kind of bell rang. Lemmings-style, a crowd of identically-dressed people came marching towards the beach. They piled into little sailing boats and headed out to sea. Immediately they began sailing in formation and started around a course of yellow buoys. It was dreamy, the water was clear, the temperature pleasantly warm. Who were these people?

We learned they formed a famous, French sailing camp. We walked through their camp by accident a bit later on while visiting the prison ruins. Got a little bit shouted at. Nothing too bad though. Over the course of the next few days, we watched this same routine play out – the ringing of the bell, the marching on the beach to the fervent sailing around the buoys. It was enough to exhaust us completely. We had to leave in the end, just to escape the efficiency. From that moment on, we learned something we’d never forget. The French are really serious about their sailing.

We’ve seen them around the Caribbean of course. The French on this side of the Atlantic form the majority of the tiny boats; the ones you look at and marvel how they crossed thousands of miles of mountainous waves. They are the boats with an extra spirit about them, as if they are truly living in the moment.

The French too tend to be the sailors who sail off from their anchorage instead of just motoring and putting out their sails like normal people. And yes, they are the boats – both big and small – who anchor way too close and with much too little chain. We once physically moved a French boat in Antigua who anchored, immediately dinghied off and either didn’t care or didn’t notice they were drifting towards us. Jack and I free-dived to re-set his anchor chain. He came back and promptly left without a word.

So, with all of this in our heads, yesterday we entered our first French Caribbean island this season. And from what we know so far, the French islands are like the rest of the French sailing world. Completely different from everybody else.

One thought on “Completely Different”