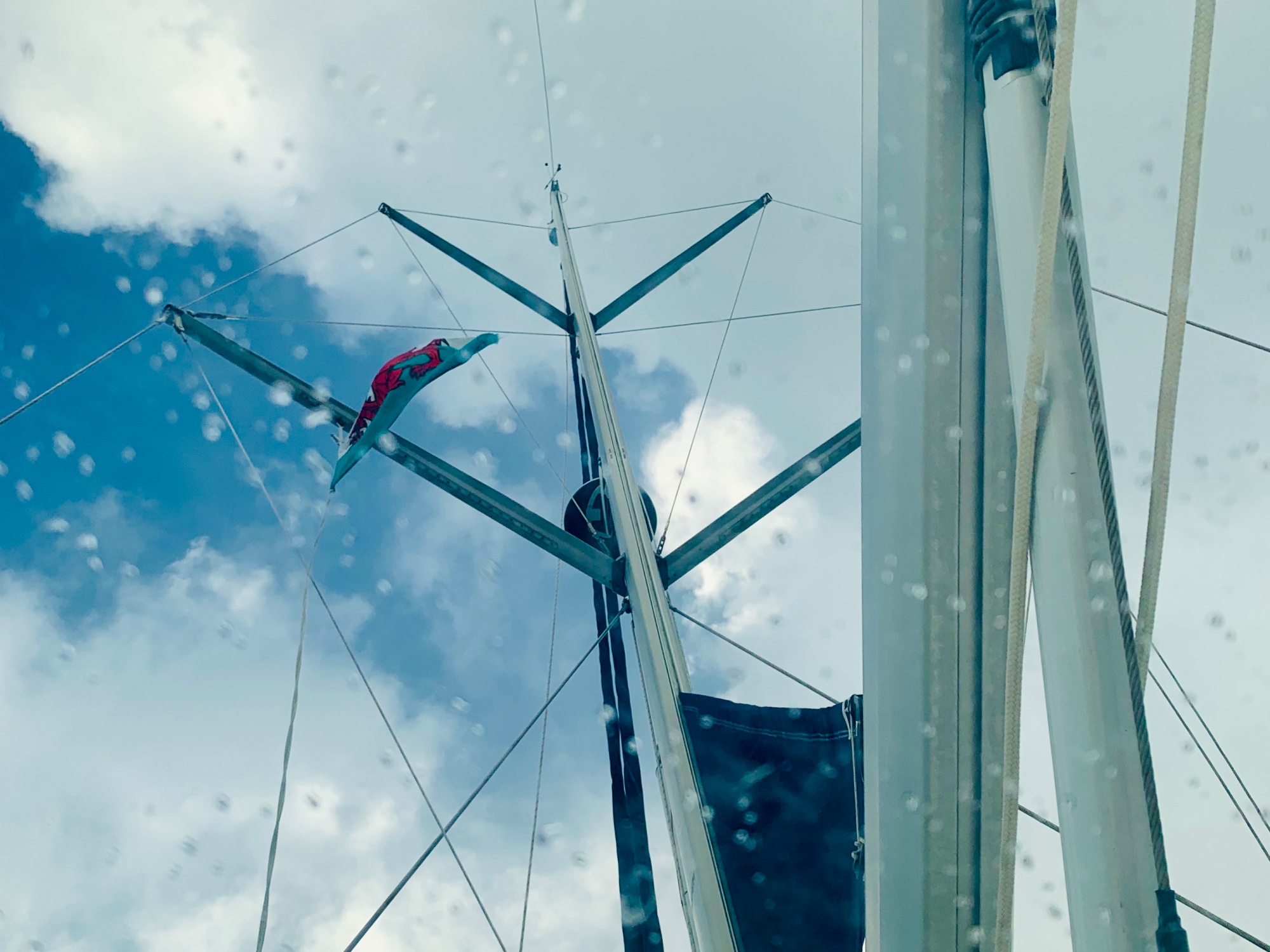 We must have opened and closed Quest’s hatches fifteen times. Rain, no rain, rain with sunshine included. Sweaty rain, windy rain, cold at the end of the day rain.

We spent some time talking in between. Our teenagers spent a good time – sleeping. Last day of Lu’s antibiotics and her ear still hurts a little. Good for her to sleep for 12 hours and catch up on rest. Delphine not as comatose but not too far behind her sister.

Meanwhile, it’s the last week before Christmas. Jack’s still in the heat of work. Phone call after phone call, emails and phone calls again. All the while, Ellie’s getting used to the flow of Quest. Today we go to shore, tomorrow we have a shower. Don’t want to do too many things in one day. Like when Ross was suspended on Friends and Joey gave him some tips. One day the post office. The next day the bank. You gotta leave something for the next day.

Still, this rhythm can take time to develop. I was worried Ellie might be bored or developing cabin fever. She’d been in the cockpit for some time. I went upstairs to join her.

She smiled at me. ‘Two boats have arrived. And the blue catamaran left.’

I remembered then Ellie being an excellent watch person when she was little – aided by Grandpa’s balcony and telescope. She always knew what was occurring.

I discovered she’s got it covered now. She knows who’s moved, who’s left the anchorage and who’s arrived, if the Canadian boat has been shouting at any more poor yachties – they have three times so far since we’ve been here. She has a running toll on turtles, fish seen jumping and any unusual events like coconuts in the water and pieces of bread. Half a mouldy loaf floated past this morning. All done with Quest’s binoculars in her hands. Joey Tribbiani would surely approve.

As pretty as this little town is, tomorrow we’re outta here. We don’t want to fall in the trap of staying comfy. Plus all these boats jostling for space in this anchorage with these free visitors mooring buoys feels like a double-edged buoy. One boat went out and left their dinghy attached so no one would take their spot. Surely the yachting equivalent of towels on hotel pool loungers.

Tomorrow we’ll head 10nm down the coast to Cousteau’s marine park. It encompasses a small uninhabited island called Pigeon Island and a mile or so of coastline. We’ll aim to pick up a buoy, snorkel, lunch and keep going another 10nm to Basse Terre. It’s the capital of Guadeloupe and the second largest city. There are buoys outside the marina to pick up. Hopefully there’s one free. We won’t leave our dinghy tied to it and go off for the day. Promise.

From this point it’ll be time to provision for Christmas. All these plans are of course subject to weather, equipment and a million other things co-operating with this plan. This is sailing. Oh yeah – and life.