I didn’t realise how into movies we were until Ellie came onto Quest. I mean, yes we hunt for good pirate movies in the Caribbean, but this is the Caribbean – and what’s the Caribbean without pirates? 😊

We also have a decent selection of films onboard – a lot are films from home. Combined with the films we bought since we left, we have enough to fill a cupboard now.

This time, Ellie brought our whole complete series of Fools and Horses. To be honest, though we asked her to bring the DVDs from home, we probably won’t watch them all. We love Fools and Horses, but found they’re a bit too dated for the girls to really enjoy. Sorry, El. Especially as she carried them all night during a layover in New York’s JFK airport. No where to sit landside.

Ellie also brought Booksmart and both the Sister Act movies. Both movies I wanted to tick off. We watch both vintage and brand-new. All movies we tend to watch together as a family.

I didn’t even know this might be a bit unusual – this movie hobby – until Ellie let slip that the most movies she’s ever watched, have been on Quest.

How is this possible? We flicked through our collection. Back to the Future? Dirty Rotten Scoundrels? Romancing the Stone? No? Someone turn the projector on!

Romancing the Stone went on first. Movies were always an occasion in my house. It was the same in Jack’s. Without realising it, we both had this in common. Now it seems our kids have it too.

Romancing the Stone has one of the best scenes in a movie ever, I think – when the Columbian kingpin recognises his favourite romance novelist, Joan Wilder, played by Kathleen Turner.

‘Joan Wilder?’ he asks incredulously. ‘The Joan Wilder? This is the author of the books I read to you on Saturdays,’ he tells the village men who are lined up cocking their guns at her and Michael Douglas. Their faces light up. ‘Juanita?’

It is still funny to see it now. Ellie, watching it for the first time, wasn’t expecting it either. Sorry for the spoiler. For anyone who hasn’t seen this 1984 classic..

So begins the movie repertoire on Questie. No horrors though. Too many nightmares. Not much sci-fi-based fantasy either. But a good comedy? A coming-of-age adventure? That’s the magic of Romancing the Stone. The character arc of scaredy-cat Joan Wilder writing from her safe New York apartment to being the character she writes about. It is so satisfying- and yes, absolutely cheesy. Next movie: Almost Famous. 💕

P.S. The photo below is our shopping trolley in Leader Price supermarket yesterday. We did a bulk shop before leaving to Barbados this afternoon. For me, adulthood will always be about the ability to do the bulk buy. Add the dinghy as a method of transportation: taking it all home without a. Breaking eggs or b. Avoiding soaking the toilet paper. 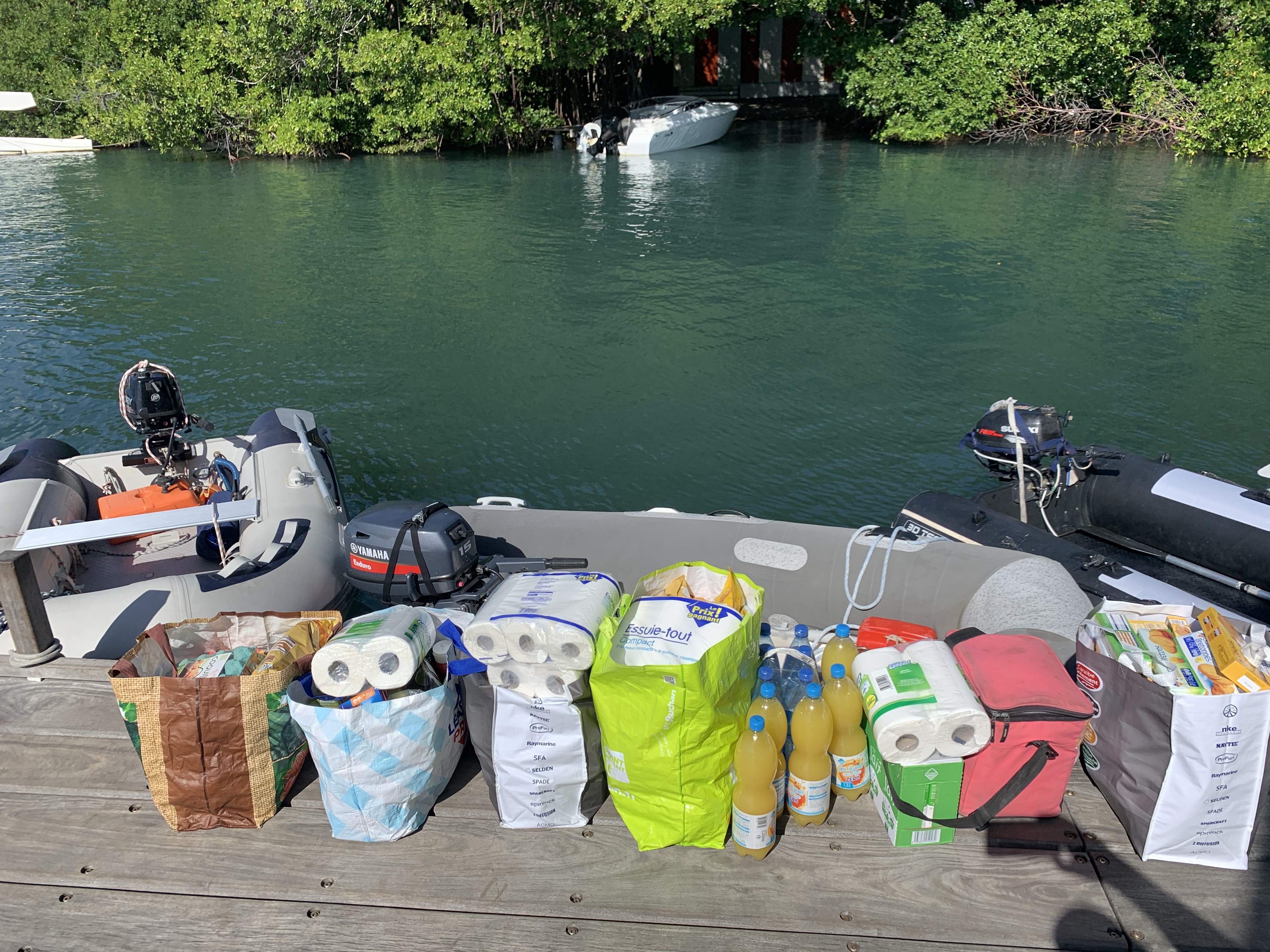 One thought on “Joan Wilder”