We always trawl a line out when we travel. Haven’t had too much luck this season. All around us, people are catching fish between the islands. Not us though. We keep getting bites who let go.

Ellie even had a dream about a big fish stopping all the other fish from taking our hook, though it wouldn’t take the hook itself.

When she first described it, I thought it was the old Jungian-comes-to-Quest moment. How do I explain to her that floating boats = weird-ass dreams? The water makes us all dream vividly and crazily. I just smiled. She’ll get used to it.

I’m wondering now though if there’s some truth in Ellie’s dream. Reason being: as we’ve been travelling over the past couple of months, we’ve consistently had something under Quest.

We know it from our depth gauge. The gauge is silent at depth – past 100m, it displays a dash. This season however, it’s been constantly lighting up – pinging something underneath us at different depths. From around 50m to as shallow as 3m. Just underneath us.

Jack’s been buying different lures. Putting out feelers. We passed three small Martinique pirogues quite far out on Friday. Then, a few minutes after Delph’s puke- sneeze, the line began to whir.. like the fish smelt the puke trail and thought, I want some of that salad. Sorry 😐.

Anyhow, the fish was a real beauty. No scales on it. Fishy, silken skin. A tuna, a yellowfin. The name doesn’t do it justice though. I nominate ‘canary-neon yellow, brightest yellow you ever saw tuna’. That’s really going to fly.

Jack held it in his hands. The quiet moment where the fish looked back at us. Huge tuna eye. Body as solid as metal. Warm-blooded as we were.

We all looked at the Cap in surprise. ‘It’ll survive if we do?’

‘I reckon,’ he said. ‘The hook will come out easy enough. If you pass me my pliers.’

I stared down at the hook embedded in its jaw. Ouch. Turns out tunas have cute black tongues. And little dolphin teeth.

Pliers were on the nav desk. I grabbed them. Are we crazy for letting it go? After we’ve been so dry fishing-wise.

I don’t know… but we let it go. Cap said we’d get a reward. We watched the tuna swim off at a million miles an hour. It sure is going to have one spectacular story to tell. I hope someone has some underwater Germolene.

In the morning we found a flying fish on the stern seat. As stiff as a board. Oops. Still, we were definitely in the Atlantic now. Haven’t had a flying fish jump aboard since our crossing.

We slunk into Barbados at 6am. The northern tip, Port St Charles where you check in. They have an outrageously posh yacht club. If you order tap water, they scowl. Love that place.

It was as busy as last time – just one other boat in the crystal-clear anchorage. John from Cardiff. He rowed over to us. He’d arrived yesterday in Barbados after crossing the Atlantic. And he had fish to give away! Dorado. After living on dorado during the whole crossing, John just couldn’t face any more. 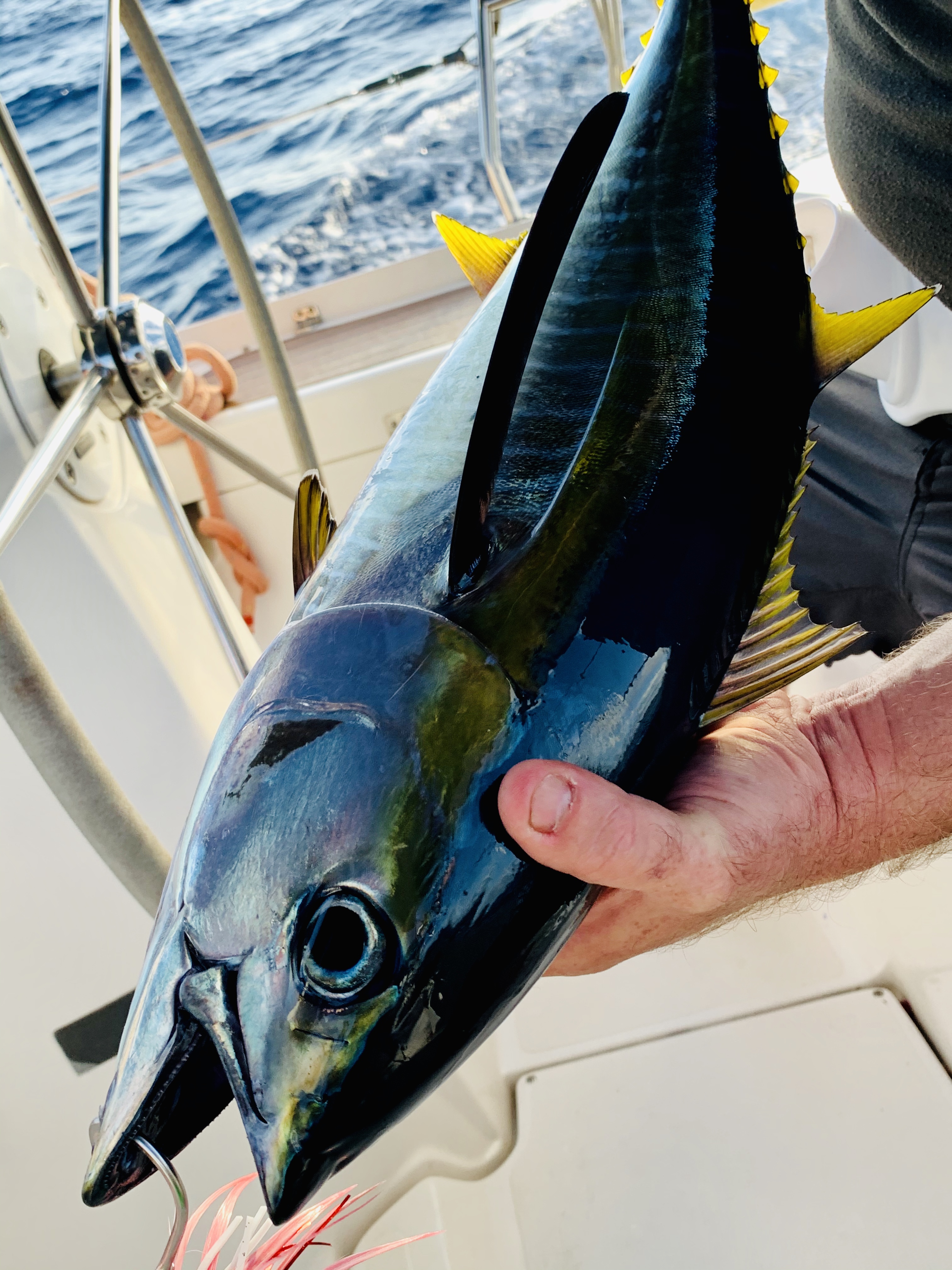