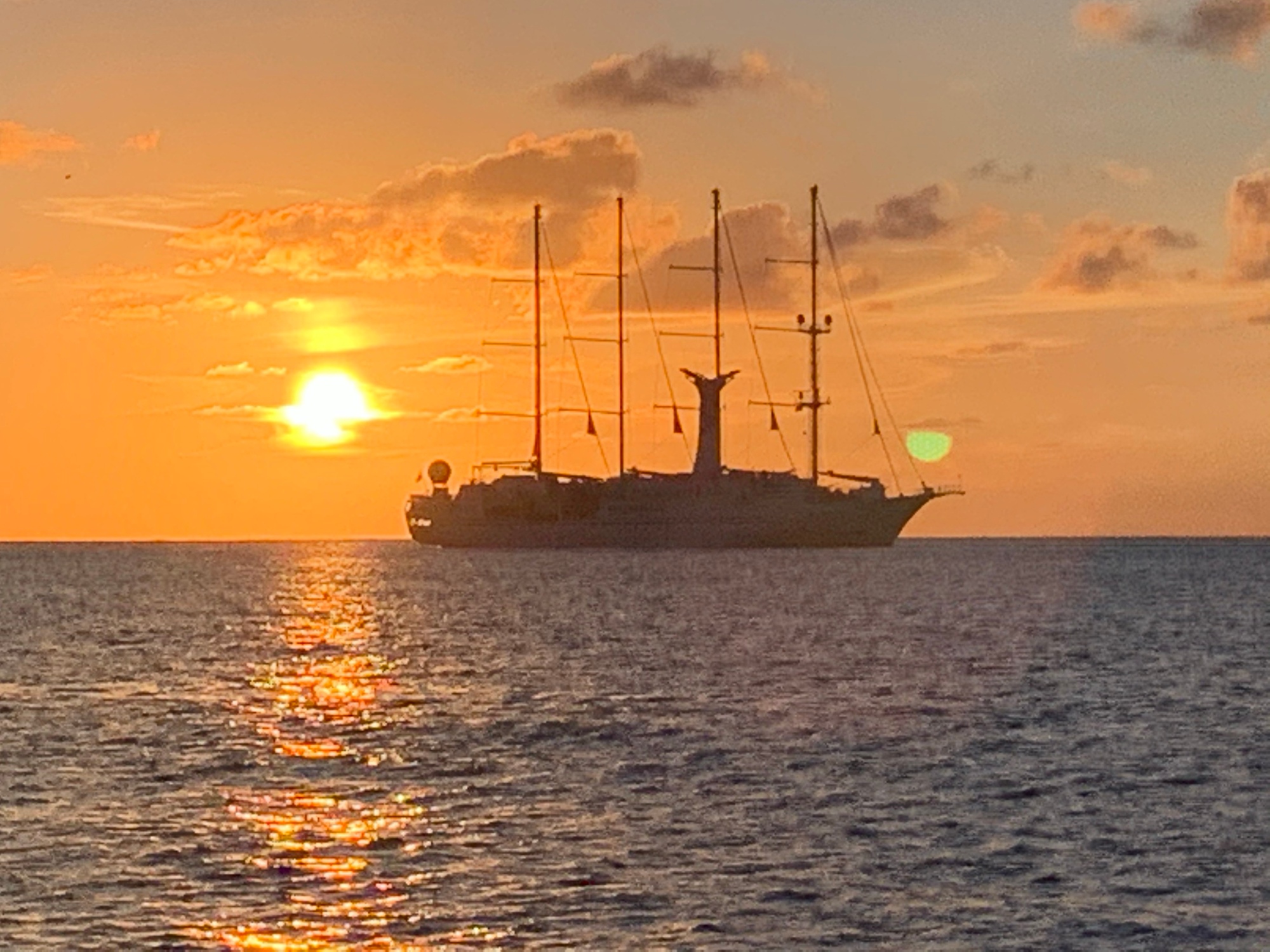 April 1st. The weather has becalmed and it’s become suddenly scorching. Sunsets stunning. Meanwhile, everything around us is whirring. St Lucia has gone into a sudden, 24-hour curfew. For at least a week in St Lucia, you cant leave your premises. Grenada is similar – with only small windows of essential trips allowed. Antigua and Barbuda too. It makes us think that Barbados cant be far behind.

Upon waking, I did the usual. For days it feels like we’re hanging on the edge of a precipice. Here we go, I thought. Read the headline. 45 cases now in Barbados. Two patients in acute care. And eleven people with the virus have only just been identified who are apparently quite poorly.

Uh-oh. The government minister was somber. If these patients have been interacting with others – it’s likely that community transmission is just about to take off here. Ok, I thought. At least I’ll finally be allowed to wear my mask and gloves when I go to the supermarket.

We’ve been considering our options. We have less than a month left in Barbados before needing to renew our visa stamps. We were told by the harbourmaster at Port St Charles this isn’t a problem – but we have to visit the immigration department in Bridgetown to do it.

Meanwhile, nature does its own thing. Time is ticking towards hurricane season. It begins two months from today. The safe weather window to sail back to Northern Europe runs for a month – from the middle of May. It’s coming closer.

A boat from the anchorage actually left today for Holland. Six weeks early. He was the small, bright yellow, solo sailing boat. Does an average of 200nm a day. Beautiful vessel. The owner found his weather window and left to the Azores.

Except officially The Azores is shut. And the yellow boat is coming from a place which has Covid-19. The owner said he will take his chances. All he needs is a quick stop to provision for fuel, water – and a pair of sailing boots. Apparently the guy only brought sneakers with him. Ok for the tropics, but his sneakers will bring cold, wet feet for the passage between The Azores to Holland.

We wonder what the officials will make of this sailor arriving before the Atlantic crossing season. In need of boots. We wonder too what hundreds of sailing boats will do in six weeks time. Without stopping at The Azores – it’s well over a month non-stop sail for Europe. For little boats who cant physically carry much water and fuel – sailing non-stop will be a struggle for most.

Then there’s us. We could do it. Our water maker’s gone a bit wonky. Looks like the pressure sensor needs to be bypassed. This can be done.

Overall though, right now our temptation is to stay out of the pandemic’s geographical peak zone. The question is: will this include the Caribbean? Will anywhere be spared? We’re following.