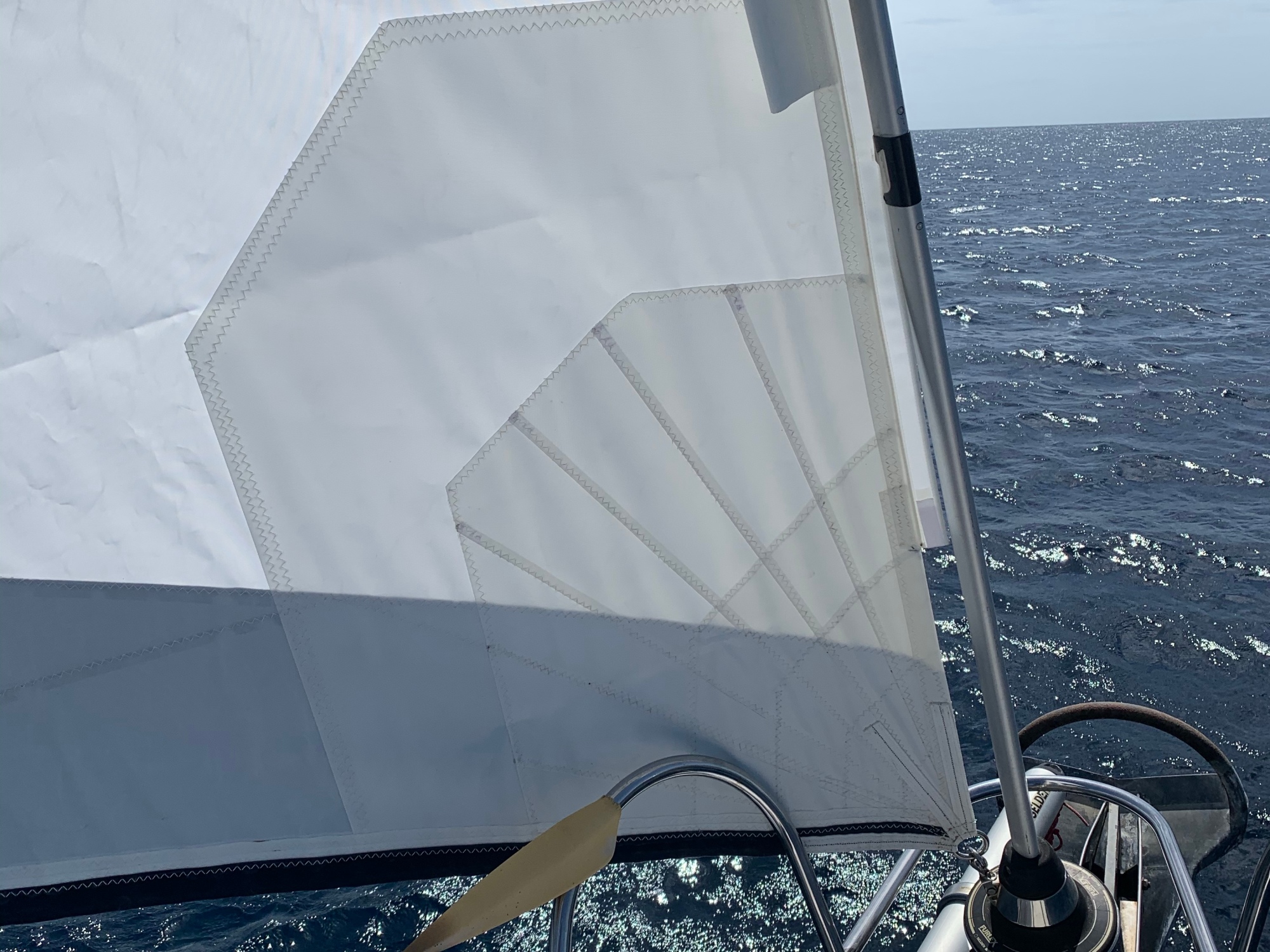 Back to writing actual sailing blogs! Where do I begin?

We are on a lovely broad reach. The wind is on our starboard quarter, blowing around 13knots. I was going to say not a squall in sight, but as I write this at 10:20pm, we’ve been covered in a misty rain. No bother. The wind hasn’t ramped up to 30 knots, so it doesn’t really count.

Combined with light summer winds and our westerly direction, I could really get into this downwind sailing. Usually we’re fighting our way up and down the island chain. It’s amazing that we could sail this way all the way to French Polynesia with the trade winds behind us like this. Not that any islands would currently let us in, but still.

We’re making a steady 5-6 knots. Our mainsail is on the first reef – over halfway out, which is not so normal for us, since our mainsail is so big. The piéce de resistance is our new headsail. Have I mentioned it before?

In June, we treated ourselves to a new headsail when it became clear we weren’t heading home. We’ve needed one for a while – flying Questie’s original headsail, which is as old as the boat. January 2008. We hadn’t really thought about it, but it was a pretty decent stretch of time for the ‘engine-room’ sail. Quest being cutter-rigged, with two sails before the main, has quite a small headsail, which helped to dissuade us that we needed a new one – at least compared those huge 140% headsails on other boats.

Plus, we were hoping to get home so our Welsh rigger, Denzel who fitted the mainsail before we left, could do the job. In the end, we called him from here.

‘What are waiting for? Get a new one if you’re staying,’ was his opinion. I swear he might have put the word doofuses at the end of it. Wouldn’t be surprising. We do love Denzel. His name is Denzel for a start. And he made us the nicest mainsail.

So, where do you go about getting a sail in Barbados? Hehe. Only the headquarters of one of the best sailmakers in the Caribbean (and beyond). Even though Barbados isn’t particularly yachtie-friendly, it is where Doyle’s sailmakers is based. Most of their work is shipped off.

Jack went to see them in situ, just after lockdown eased. They were still busy making and shipping their custom-made sails. And because it was officially hurricane season and we were in Barbados, they gave us a sweet deal.

We hoisted it when it was ready. Rolled it up around the furler, and waited to fly it. Actually, during our month of recent diving, we kind of forgot about it.

Not today though. Today it’s sailing. It’s beautiful. It’s made us realise what a saggy old blanket we were flying before. Said in loyal whisper. Meanwhile, I cooked and washed up for dinner and didn’t feel a hair’s breath of seasickness. Our new sail is tight, lovingly crafted and powering us through this sea like it has cogs attached.