It was sailing vessel Hope’s buoy we managed to reserve a couple of months ago when Sue from SV Piano on the Friday supermarket bus told us they were heading for nearby Curaçao. SV Hope have since told us too that we were lucky. Loads of people approached them for the buoy after we asked. Love it when a plan comes together.

Bonaire has been full of yachties not wanting to leave. As there’s no anchoring allowed in its waters, it’s created a bottleneck. Now finally, our time waiting in the marina, almost three months – was set to end. Hope were ready to depart.

Maybe this is what we all need. Marina living is like cat nip at first, all water and electricity and poor wifi. Stepping off the dock onto land is handy, you tell yourself. It is too. But after a while, you might as well live in a house. Better, since there’s more space and you and your neighbours aren’t so closely bunched together. There’s a certain sadness about marinas as well. A boat’s supposed to move. At least it should bob around freely. Yep, probably three months in a marina should be the limit.

I wrote SV Quest on a fender in permanent marker. Jack was set to go over and tie it to Hope’s buoy as they were releasing it the following morning. This would confirm our spot.

Meanwhile, the sky suddenly went black – at about five in the afternoon. A post came through on Facebook that Curaçao airport was recording 40 knot gusts and it was heading our direction.

We were talking to Jean-Pierre on SV Vanille on the dock about the benefits of SSB radio. He was telling us he finds it most useful for long passages. Behind him, mast after mast began to suddenly appear. After the recent wind reversals – last week’s being quite severe, people weren’t taking chances. Boats were coming in from the mooring field. Adding to a number in the marina who had come in after damage to their cleats.

Then Eg the Dockmaster appeared. He was going to squeeze someone between us and our neighbour, even though there was no official space. As he said it a sailboat appeared behind him. The boat belonged to a solo Dutch sailor called Cynthia.

Cynthia look scared. I don’t blame her. I would have been scared. The storm was just about to break behind her. She was driving her boat fast at about 5 knots. Before we could say boo, Cynthia shot into the space between us and our neighbour. Coming against us stopped her – like a cork. We heard the fenders scream. We all looked at her with our mouths hanging open.

‘That wasn’t supposed to happen like that,’ Eg muttered.

Anyway, no worries. No permanent damage was done. We all waited for the storm to pass – except for Cynthia. She walked across Quest to get off the pontoon. Off for a long shower in the marina showers. Probably for a swim in the little pool at midnight. We gave her the wifi code. Cynthia had arrived just as we were set to leave. Feeling the cat nip. 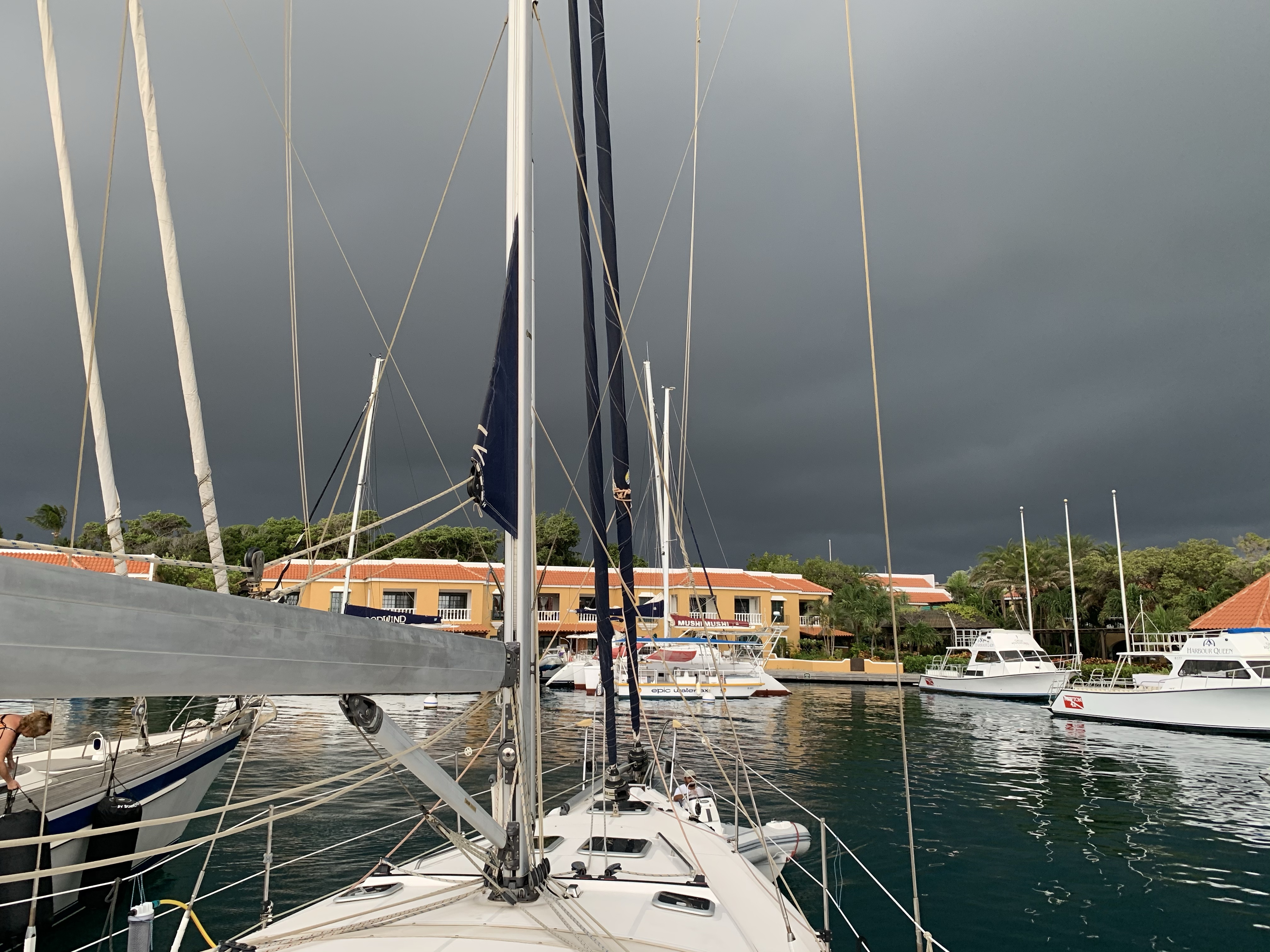 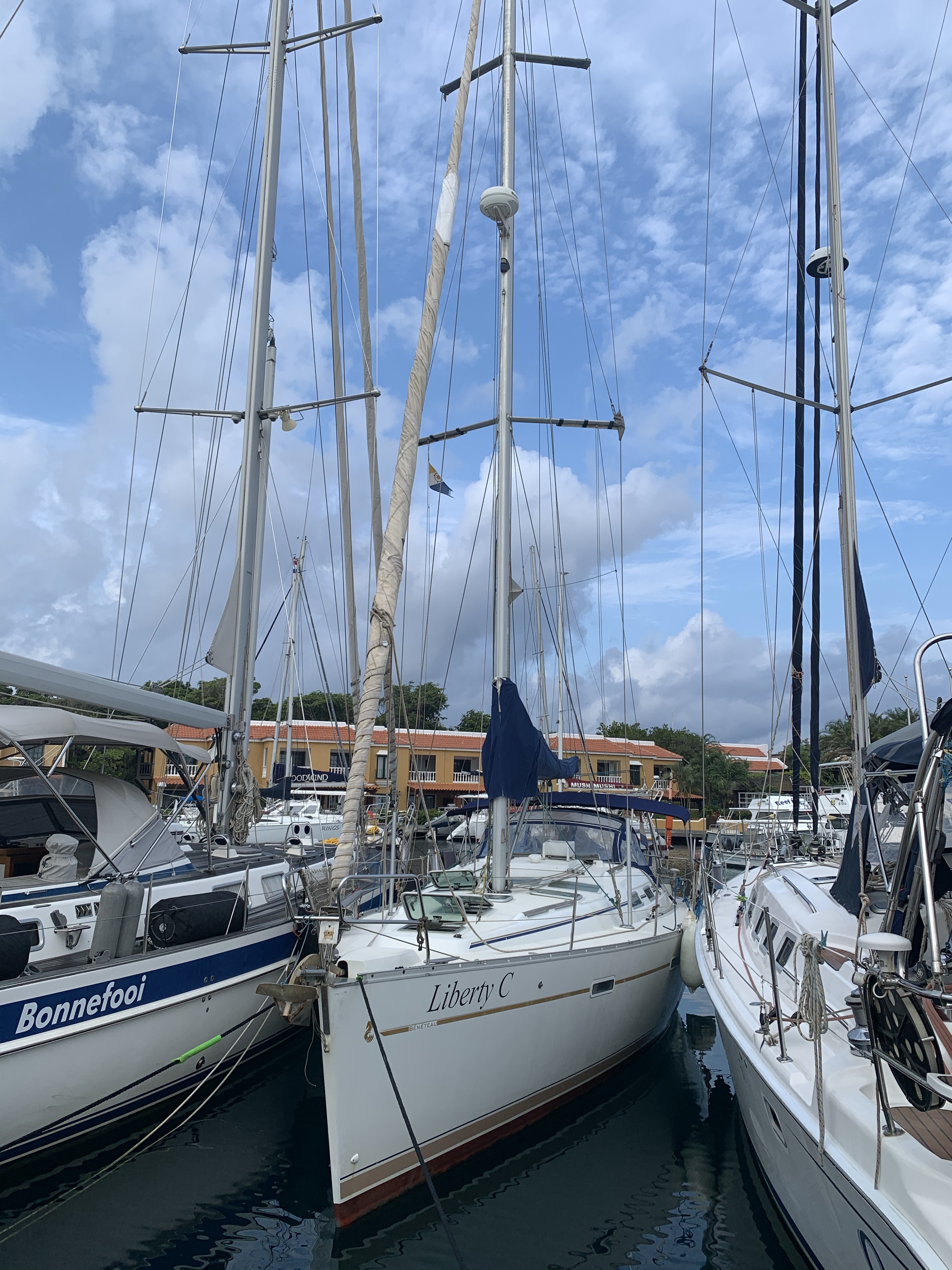