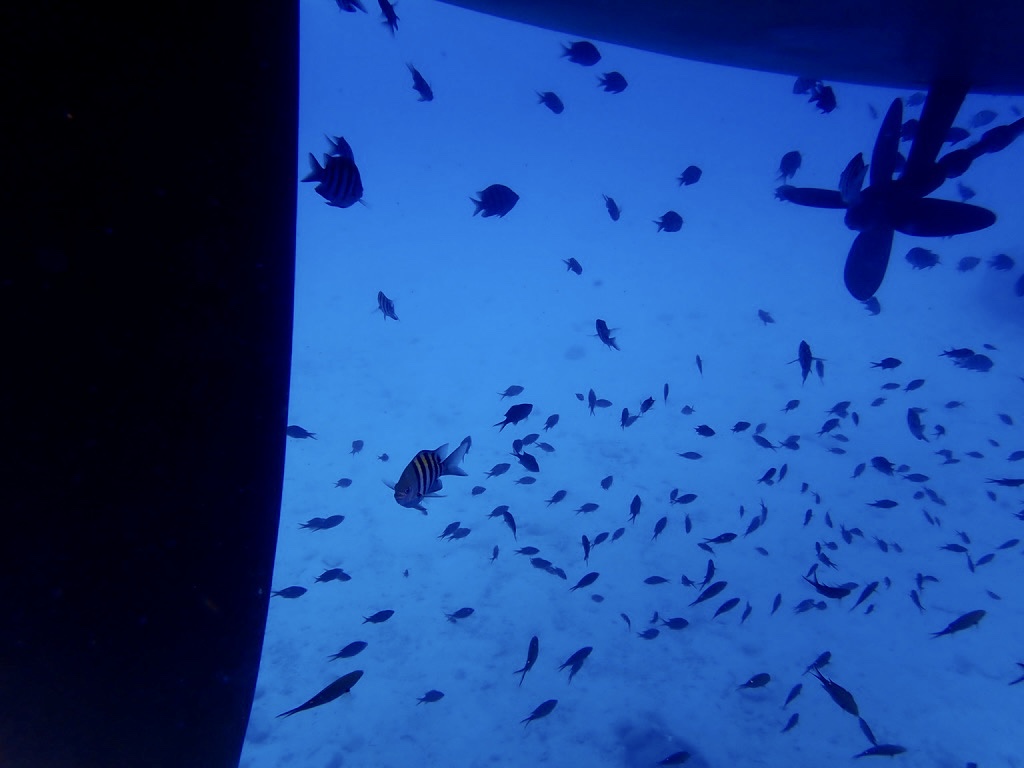 The tarpon were hungry today. Normally, when I’m snorkelling, I may see them in the distance, or swimming a fly-by past. Today, they circled under Quest endlessly.

I suppose it isn’t fair for them. Here we are feeding the smaller fish. The sargeant majors come up from the reef to the surface and happily grab their bread – while the tarpon watch from below. When I think about it, they probably want a bit of bread too. It’s not their fault they’re humongous.

One tarpon did swim toward me. I feed the fish in the water – with a mask and snorkel, so I can see as much as possible. I stayed motionless and the tarpon kept coming towards me. Like a huge silver bullet. A remora stuck to its back.

Only a metre away or so, I bailed. I waved at the tarpon. I do wave at fish. I find they seem to appreciate it. You see the equivalent of their fish eyebrows moving upwards. What is that crazy lady doing?

As soon as I waved though, the spell was broken. The tarpon seemed to wake up. It swam back down to the bottom, to the reef. Then it began to circle again. Every time it got close to a reef fish, the intended prey would dart off. The fish hid behind a coral rock. Under a sponge. Anywhere out of the tarpon’s mouth’s reach.

Predators have to eat too. I could feel the tarpon’s frustration. They are so long and sleek. Only the swishing of its caudal tail pushing it forwards. And the round eyes searching. They’re always searching.

It was turning out to be the biggest cat and mouse game. I watched from above. The smaller fish meanwhile, seemed to be laughing at the surface – while they ate their bread. At one point, the tarpon moved differently, Twisting its body more suddenly shark-like. Trying the art of surprise. Still, no joy. The fish got out of the way. The tarpon kept swimming. I’m thinking it might need its own bread supply.