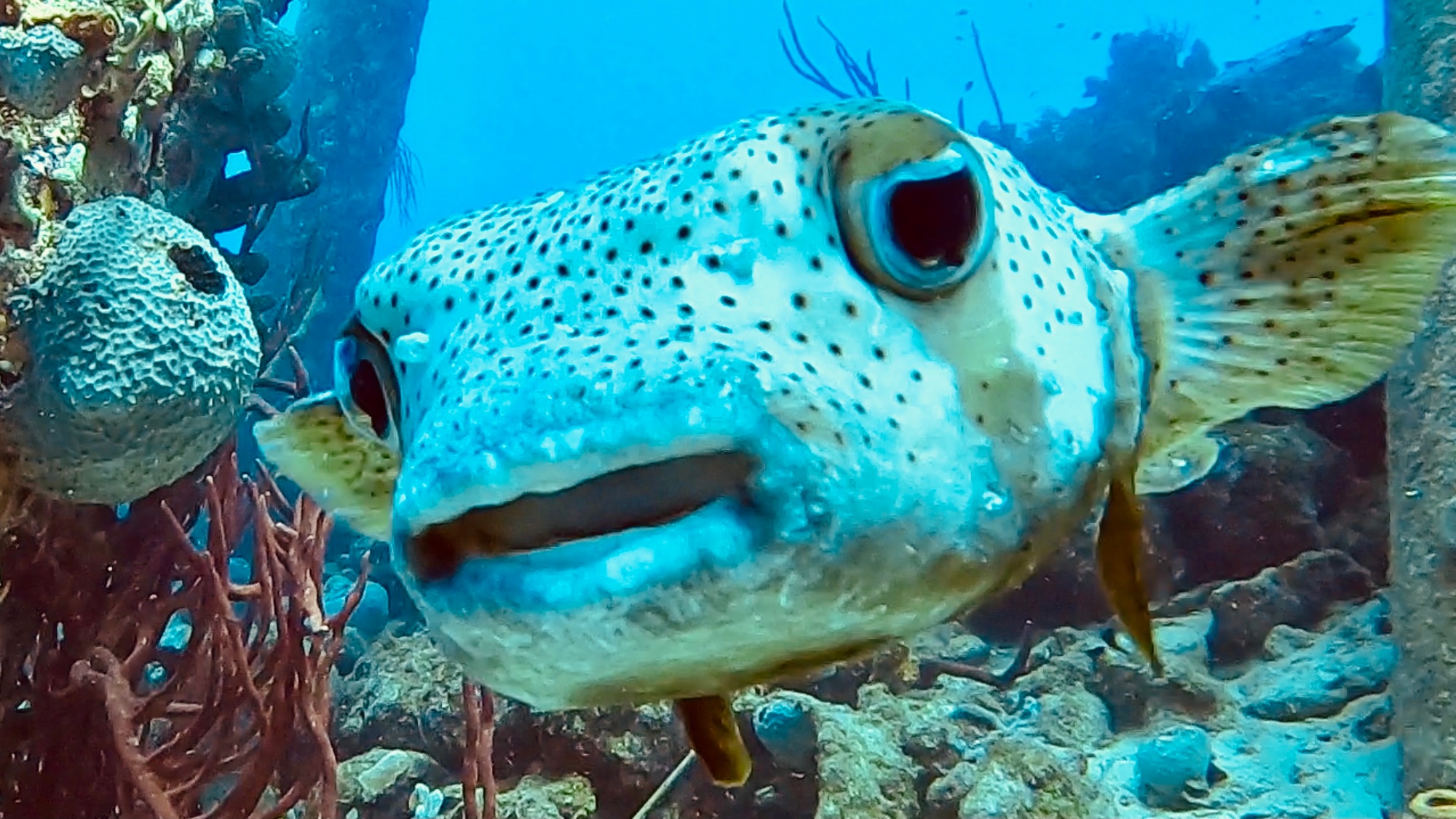 I’m a bit in love with the pufferfish. I think I’ve said it before, but the love is just growing.

I love that I get to spend a good part of the day working with the girls – with history assessments (William the Conqueror – jeez, it feels like we know his very ins and outs), maths class, literacy targets. Then, at the end, I get to go out, jump in and stare at pufferfish.

There are different kinds here. There are the smaller, browner ones with the crazy eyes. Crazy because they look nothing like eyes. More like glittering opals.

The porcupinefish is frisky right now. You often see a pair of them zooming around the place. I guess it’s a certain time of year.

A few months ago it was all about the octopi. They were shagging left, right and centre. We had a couple under the boat; under this rock and that rock. Eventually they disappeared. I learned then from the My Octopus Teacher that the female octopus was probably somewhere laying on her eggs… and timing her own death.

Her own death! This was because as her eggs hatched, she would expire. Could anything be as cool as that?? Let me think. Delph, let’s just get your knowledge to the end of the 17th century, make sure you can cook your own meals and your sister has completed the IGCSE higher maths curriculum without having a heart attack. Ok, I’m out.

The other day, two frisky porcupinefish were chasing each other around with their funny, juddering fins. The way they move, it’s as if they have an appendage stuck into an electric socket. One of them even started puffing up. My own eyes went on stalks. I’ve never seen a pufferfish puff up. Not a living one. A dead one floated past Quest once, like a spiky pillow. Here, this porcupinefish, the shape of a long triangular prism (go Delphine’s geometry class) was puffing out; either to impress a lady or to fight with a rival. Couldn’t figure that last part out. It was good though.

Still, it’s not all happy times. We’ve seen tragedy too. While diving Salt Pier, Patrice and I came upon a porcupinefish who didn’t swim away from us. It swam into us instead.

We looked at each other. That wasn’t exactly normal. Then we noticed the unmoving body of another porcupinefish laying on the seabed below. Oh no. The porcupinefish wasn’t allowing us to come close to it. Well, it wasn’t sticking its highly poisonous spines into us or anything. It could though, I guess.

Apparently Charles Darwin heard that a fellow naturalist, Dr. Allen of Forres had “frequently found a Diodon, floating alive and distended, in the stomach of the shark; and that on several occasions he has known it eat its way, not only through the coats of the stomach, but through the sides of the monster“.

Sorry. That just made me love this animal more. The porcupinefish.