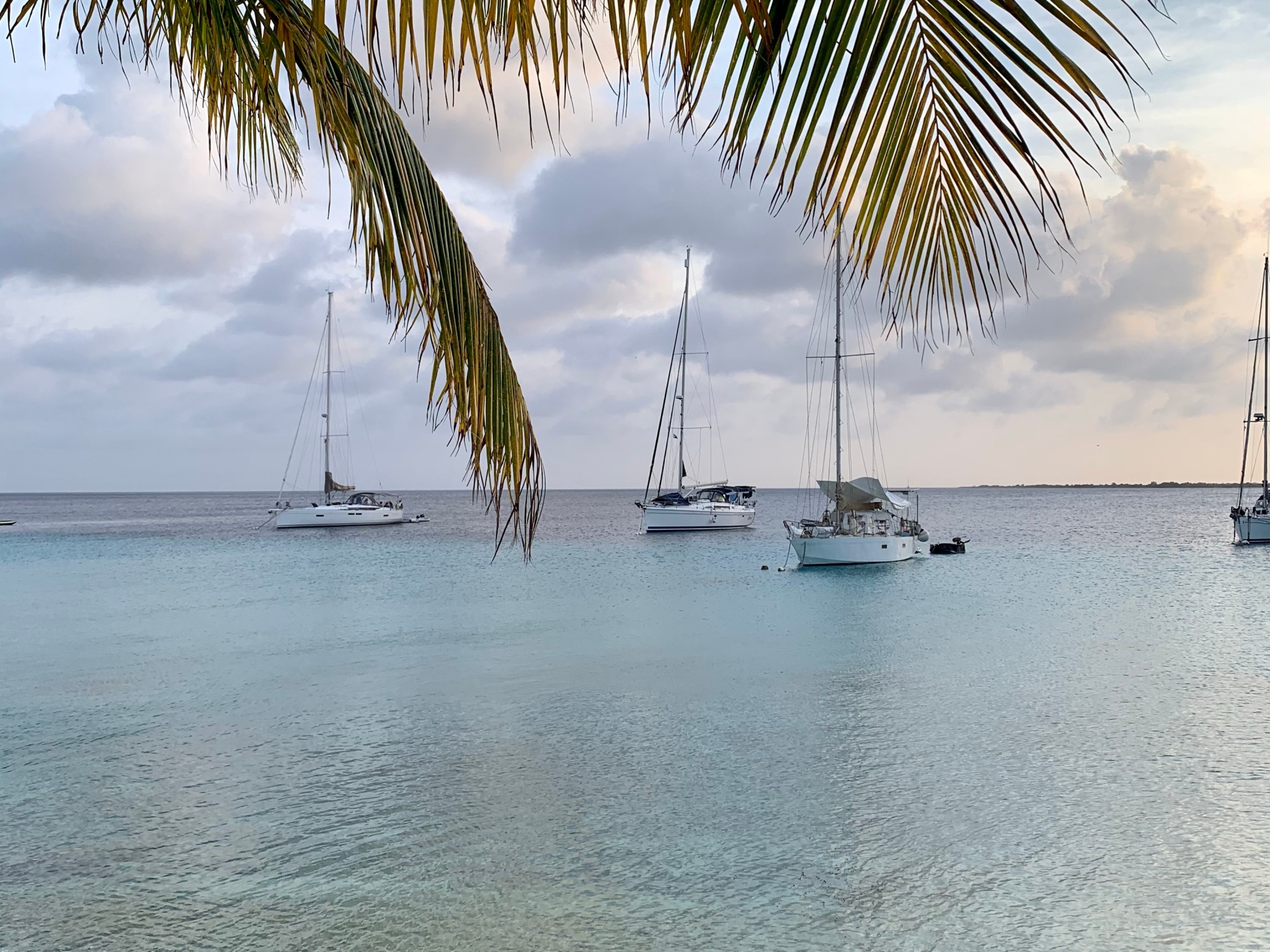 Midnight, and the wind is gusting around like it can’t make up its mind what to do. Curfew started from 9pm. Now the streets are silent in Kralendijk.

I’ve realised I’ve been taking these quiet streets for granted. Before curfew was imposed, the promenade shook at night with guys on motorcycles. A national pastime apparently – to go as loud as you can on beefed-up bikes down Bonaire’s main waterfront.

With the curfew, it’s just the sound of the wind and our German yachtie neighbour, Wolfgang’s lines tinkling on his mast. What a minute. Banging against his mast. Nah. That’s not right either. A church bell for the sailor. Meanwhile, Wolfgang hangs out mostly with the other British boat, SV Mischief, next to us.

Tomorrow, Lu’s final school assessments continue. This means she has no normal lessons. The assessments last one more week after this one. She has her first Physics paper in the afternoon. Delphine has normal school. Against scary assessments, Delph’s lessons gives us all a nice routine, especially as she has a new and inspiring English teacher. He speaks in hushed tones – which makes us really listen.

We’re on modern poetry. It has caught Delph by the wires. She had to write her own version of Ted Hughes, ‘Platform One’ – the homage to the WW1 memorial statue at Paddington Station last Friday. At first it’s true we wished she was doing the bear from Peru instead (who we discovered also has a bronze statue at Paddington Station). In the end though, re-crafting the war statue turned out really rewarding. Delph enjoyed it.

What for the coming week? Jack and I hope to fit in another dive mid-week if we can. Another early morning one. It was refreshing last week to get a dive in – even if we didn’t see the roaming hammerhead. We’ll also work on passage-planning jobs. We do something every day now on Quest.

Yesterday, I went through all the medicines. I threw the really out-of-date ones away, and kept the not too old out-of-date medicines. Bandages, finger splints, iodine, skin closures. Kept those – for our little hospital.

I am glad to see we still have enough antibiotics for an outbreak of a range of strange pathogens – which hopefully shouldn’t be the case in the middle of the ocean. I am trying to figure out why we have so much fluconazole though. Did I think we would get that many fungal infections? Huh. Well, good thing in case we do.

There’s still the adrenaline shot as well – all the way from Las Palmas. That large needle has been with us for almost our whole journey. Still hoping to use it – if necessary. I once had an adrenaline shot. It was transformative.

3 thoughts on “Respect to the Adrenaline”