Cupboards, lockers, showers and underfloor lazerettes. I feel like the Hogwarts’ sorting hat. Six years of stuff – and lots of secret cubby holes to look through. It’s been a perfect storm for hoarding. Except that I suddenly want every space to be spic’n’span before we cross. Yesterday, I discovered the Christmas decorations were in the same cupboard as the life jackets. Life jackets! Almost forgot about those.

I moved the decorations to the same cupboard as one of Quest’s three air-conditioning units. This one is under Lu’s bed. Moulded the Christmas tree onto an empty corner and stacked the decorations around the air-con pipes. The life jackets all need a good wipe. We still have Fin’s yellow doggy life jacket too. Hmm. My fingers twitched examining it. No, don’t throw. We’ll keep it for when we get home.

Emptied the big cupboard under the saloon table next. Got rid of our two (!) chemistry sets. I stripped them down and put the essentials into an empty ice cream tub. No way I’m throwing out a perfectly good glass beaker. I kept the electronics kit too – still have to construct that burglar alarm – and put the kit in under Delph’s bed, which has traditionally been the shoe cupboard. Except we don’t have too many shoes left. Somehow we’ve ended up with just one perfectly good flip-flop.

I carefully put in the stuff from the big saloon cupboard – which is set to become a bulk food container. This included half a kitchen tap (we only needed the nozzle at the time), a foot pump and the electronics kit. Oh, and the toaster we use when we’re connected to shore power. Had to lay it all carefully down so they don’t touch our iso-transformers. These mamas get hot when we are plugged in to shore power.

In Delphine’s hanging cupboard I discovered – shock horror – the sailing boots. Oh my goodness. I have not touched them for almost two years, when I last unpacked them in Trini straight from the suitcase. One of the six suitcases we brought from the U.K.

Never forget my mum expertly re-packing those suitcases in her garage so we could fit everything the night before we left. My mum having a freakish gift for packing a bag. Wetsuits, dive gear, toiletries, oilies: everything we thought we would need for the duration of the tropics and then a much colder sailing passage home.

I remember her looking at our thick, leather sailing boots and shaking her head. As if this was one step too far. Before she began to stuff our dive masks into them, wrapped in socks. I took the boots out of the cupboard now. They also needed a little mould removal. A wet cloth and then some wax polish later – and they are ready to return. We still have the suitcases too. They are in the one cupboard I haven’t looked through yet. 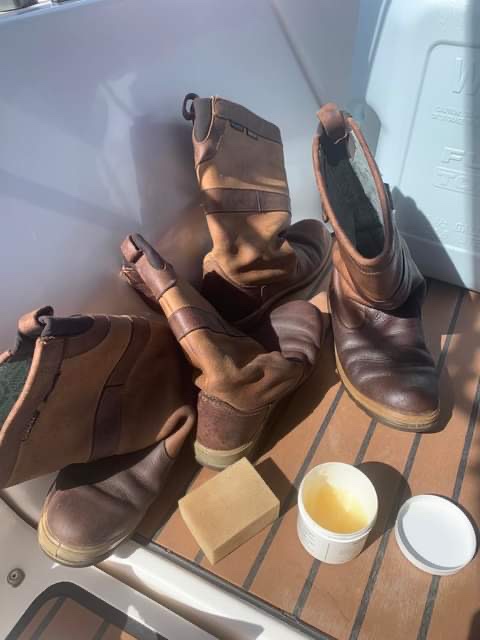