Lulu is studying electricity next term. With this is mind, we took her to one of the birthplaces of electricity: the Royal Institution. Let me give you a flavour for the place. Electro-magnetism was discovered here. The first electric generator was invented in its basement. The first transformer too. The terms electrode, cathode, anode and ion were coined in this building.

And that’s just the electrical stuff. Sodium was first isolated here. Potassium, magnesium, boron and barium. Benzene and argon too. You could write a really cool poem about this stuff. You’d end it with how hydrogen went liquid, then solid while the lab next door discovered Earth’s greenhouse gasses. I know; it would be a weird poem. Science does that to me though. It comes across all beautiful and distilled.

To add to its scientific status, the Royal Institution is situated within the heart of Mayfair in Central London. Behind the Cartier shop and De Beers Diamonds. This neighbourhood is like wealth on steroids. You half expect it to be gated. There’s even a little corner shop. We spotted Victoria Beckham’s store on the other side of the road. A few people were hanging out on pristine doorsteps – lunch breaks – no time to be humbled by this place. Meanwhile, Teslas were bunched up together like giant grapes on the road, too large for their electric car parking spaces.

On the way down, we passed a number of art galleries. Mondrian-inspired blocks of colour, a few ocean-scapes; all wrapped up in gold-plated exclusivity. It made me wonder how happy this kind of display makes the artist? Sure, I get it, they make a lot of money. Still, money isn’t everything. Also, don’t obscene levels of wealth take away from the spirit of the work? I know. Rhetorical question.

Carry on. The Royal Institution is at the end of Abermarle Street. As you enter, you realise that Michael Faraday is its rockstar. It helps of course the museum downstairs is named after him. Why? Well, for starters he was an excellent experimentalist. He had the rare ability to work out how to answer scientific questions by experimental design. Not an easy thing to do. And his experiments were elegant which in scientific terms often means simple.

Plus, like Van Gogh, it’s hard to separate Faraday’s story from his work. This is apparent from the moment you step into the building. I’m inserting a pic here of the plaque above a main door. See you on the other side:

I can’t see it either. Let me quote instead. ‘In the year 1812, a ticket for the last four lectures delivered here by Sir Humphry Davy was given by a member Mr Dance to an apprentice named Michael Faraday.’

The word ‘apprentice’ is key. Michael Faraday was from a humble family. He left school at fourteen to serve as an assistant in a book binders/shop. After he’d been given a lucky ticket to these lectures by Mr Dance, he wrote up his notes, bound them into a book and sent them as a gift to Sir Humphrey Davy. Davy was impressed and had just lost his assistant. He asked Faraday to come aboard.

Luck really was electric. Faraday returned the favour by inventing the way electricity is stored and conducted. No power station would work without him today. Our own comforts on Quest would be seriously compromised without him. The ability to do the high tech stuff – like charge the electrical devices that allows us to make money and do school, came from his work in this basement laboratory. Sure, maybe someone else would have done it if he hadn’t. But he did do it.

He did it too, even though he couldn’t craft the algebraic equations that explained his experiments in mathematical terms. He didn’t know enough algebra for this. His price for missing formal, higher education. Apparently, Sir Davy’s wife used to make Faraday eat with the servants too. Even being a famous scientist didn’t change her mind Faraday was a commoner. And she was right. He was. Faraday should have told her to stick it in her Faraday cage.

Now Cartier can drop off the diamonds. 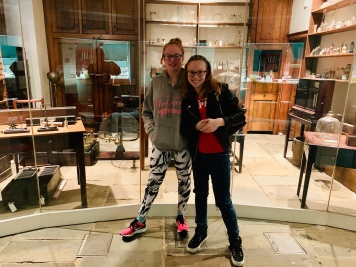 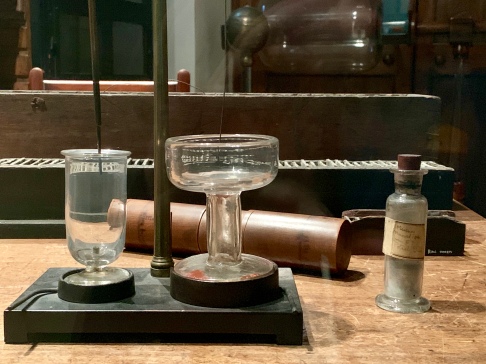