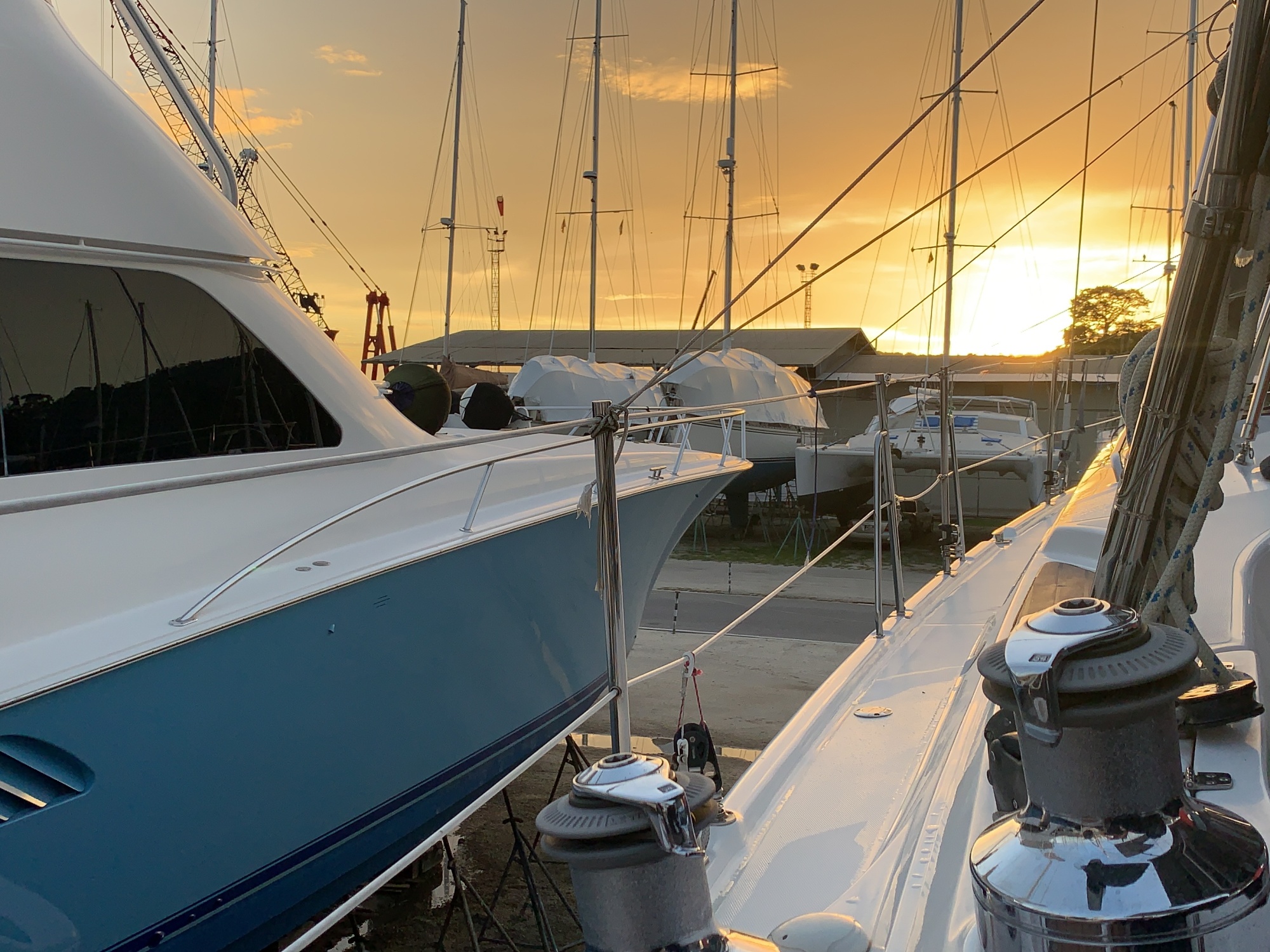 Before we left last year, we ordered a new Raymarine touchscreen plotter. This is our marine sat-nav. As well as routing, it communicates with our auto-pilot, tells us wind, currents and tides, then factors them into our course. It alerts us to other vessels in the vicinity using satellite AIS. The plotter links to our new Doppler 2 radar too and overlays the information. It does a thousand other things too we’ll probably never appreciate. And yes Cap Jack – I’m speaking for myself! 🙂

This plotter really is amazing. It’s smaller than our original plotter and is loads less energy-sapping. Dennis the electrician says just one of our old instruments consume as much energy as our entire new set-up. What a charmer Dennis is. Music to our ears.

At the same time though, we’ve been fretting over Quest’s house battery bank. Bought in Neyland boatyard, Pembrokeshire in 2015, these RV-style batteries have looked after us beautifully ever since. I never thought I’d have so much affection for three large batteries under the saloon table.

Their recommended ‘life’ is 400 cycles. Hmmm. 400 cycles for Questie was probably beginning of 2018. Then we had three months on the hook in Barbados. Not once we went into shore to plug the batteries in. With this in mind, we’ve been test-running them during the week… and they’re holding. But just.

It’s been making us twitchy. We’ve been doing the energy calculations. Ok, new navigation instruments are light on the batteries – in theory. Sorry, Dennis, I just have to see it first in action. Too many times the auto-pilot has died in the middle of the night – on my watch. It took me years to convince Jack it wasn’t something I was doing. Until then, all suspicious looks. Married sailing for you.

Then there’s the fridge. That’s mandatory (for us). The freezers, we don’t have to work but they’re super handy. They allow you to stay in anchorage when normally you’d be looking for a shop. Unfortunately they steal a lot of energy, especially in the tropics. Duh. What are we thinking?

Next; the lights. Thanks to Harry (hey Harry!), we’re going almost completely LED now. This is massive – since we haven’t been able to use our main saloon lights for years.

Then there’s all the charging we do. Cue the fabulous solar panels. On a sunny day, they generate enough juice to turn Quest’s inverter on at about midday. Everyone runs at the chargers like a pack of hungry bulls. No wonder we all need glasses.. Oh well. No going backwards.

If it isn’t sunny outside, we usually run the generator instead. Our gennie is an underused crew member on Quest. She’s so capable, but Jack has always been hesitant to fully employ her. This is because he sees her as an emergency life raft – called out for when we really need her. Ok. Fair point.

I’m leaving a few things out here. Electric winches, flushing toilets, etc. It’s been a while since I focused on this stuff. In the end, we gulped a large gulp and bought new batteries this week. They’re coming from Miami. Lifeline marine AMGs – handmade in California to aviation spec. If they sound expensive, yep. You called it. Boy oh boy. That’s our energy.

One thought on “The Energy on Quest”