The conversation started when we were walking up the hill. Note – we were walking up an actual Caribbean hill. Shock! Horror! But here we were. Just before 8:30am. And although we’d just started, the views were already as good as everyone said they’d be.

‘So,’ I said, staring at my phone, ‘looks like the French were on their way to Jamaica. They were planning to invade the island with help from the Spanish. The flotilla was led by Admiral Comte De Grasse.’

Everyone took it in. ‘Comte De Grasse? What kind of name is that? It sounds like some kind of botanical cheese.’

True that. Meanwhile, we were on the way to Fort Napoléon. Big fort, big view, museum open until half-12.

I peered at my phone. ‘Jamaica was super-profitable at the time. Its sugar exports accounted for 20% of the total British economy.’

‘What year was this?’

We’d gotten to the first amazing view and stopped. The whole south coast of Guadeloupe lay ahead.

‘The French had 35 war ships – ‘ships of the line’, including two 50-gun ships. They had a hundred cargo ships! The Spanish had 12 ships of the line. They set off from Martinique after capturing St Kitts a few months earlier.’

We carried on up the hill. ‘Didn’t sound good for the British then,’ Jack said.

‘Not good at all,’ Lulu echoed.

I looked down and took a breath. Reading and walking was an extra challenge. Oh well – this part was good.

‘The British had a slight numerical advantage – 36 ships. And they’d recently copper-sheathed their ships. Because it stopped marine growth, this made them much faster.’

‘I wonder which boat is also copper-coated, making her much faster?’ Jack mused.

I looked down. ‘Ok, so led by Admiral George Rodney – of Rodney Bay fame in St Lucia, and Rear Admiral Samuel Hood – remember the guy who turned that rock off Martinique into a ship that the British naval fleet still salute to – they chased the warring party. Caught up with them just south of here.’

We’d reached the fort. It was indeed enormous. Huge stone outer walls circled the hill. We were sweating after our twenty-minute jaunt. Imagine actually building this thing?

We went around to the entrance, a long tunnel over the moat and through the stone ramparts. The doors were shut at the other end. Jack pushed them open.

A voice told him, ‘Museum is open in fifteen minutes.’

We were early. Excellent. Love it when we’re early.

‘What happened next?’ Delph asked.

Ah, yeah. What did happen? I went back to my phone. Oh crap. The next part, the battle part was complicated. I had to pause to absorb. By this time I’d lost most of the audience. They were now caught up with a cannon by the fort’s entrance.

‘The Brits broke the line,’ I said. ‘Novel method of sea battle. It won them the battle. Also, instead of spreading out to attack, they formed localised concentrations. A tactic they’d repeat for the next five battles, including Trafalgar. Meanwhile lots of French died, around 3,000. British casualties too.’ I paused. ‘Doesn’t say about the Spanish. And Comte De Grasse was captured, miraculously unhurt.’

By this time the doors to the fort were opening. We could see inside a large rectangular house. Gardens of cacti and succulents surrounded the property.

‘So the British saved their prosperous Jamaica,’ Lulu remarked, as we headed towards the doors.

I kept up with her. ‘Yep, except by doing so, they’d extended their military resources to maximum capacity. They didn’t have enough fighting power to win the American Battle of Independence. But, at the time, sugar was worth five times that of tobacco. And tobacco was grown mainly in America.’

Aha. I put my phone away. The answer was there. The decision made.

The British chose the Caribbean over America – not for sunset views or island preference. For profit. Surprise again. With this, we headed into the fort. 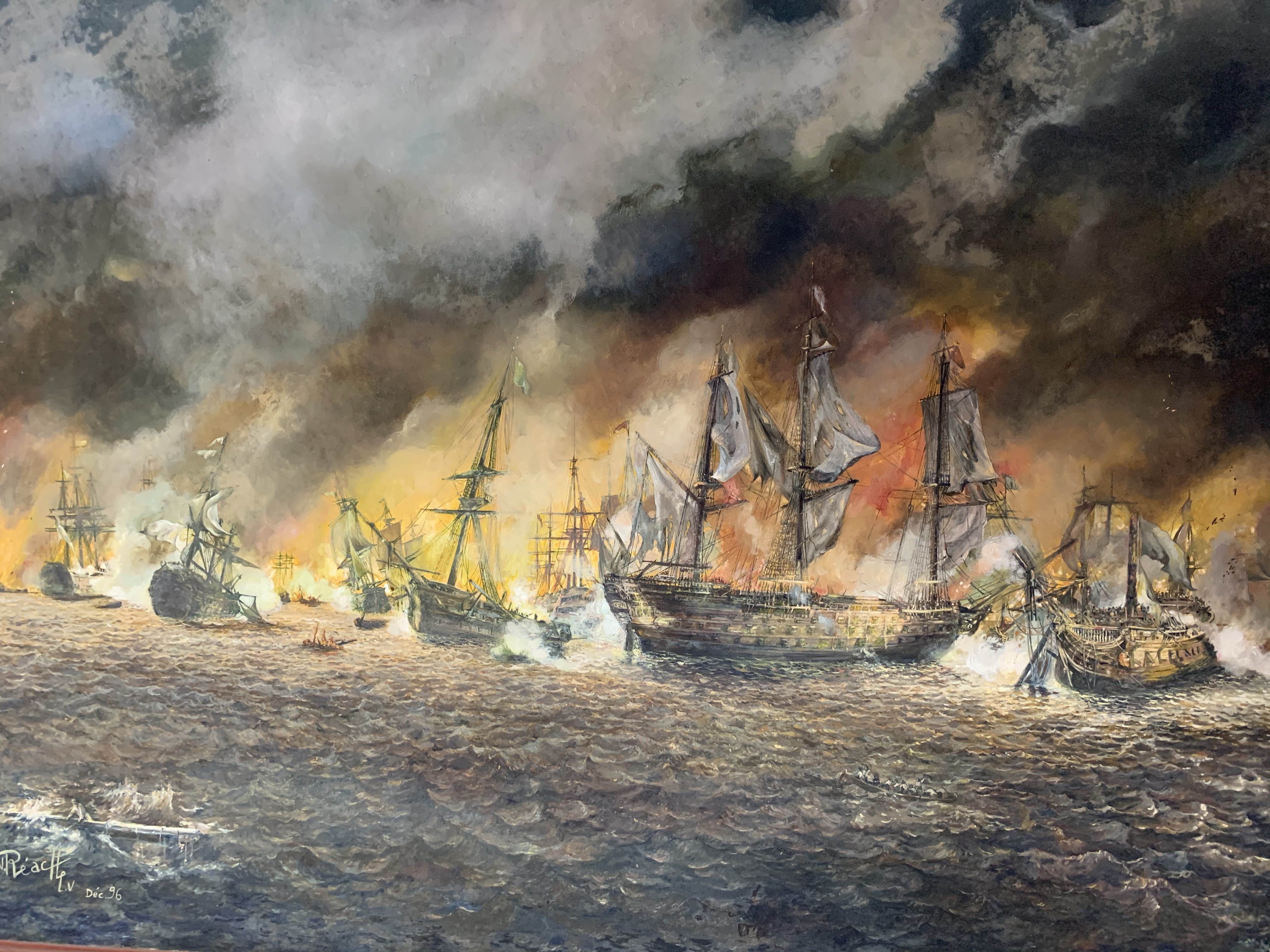