8:30pm UK time. We wish we were watching the Gavin and Stacey Christmas special. Feels like everyone back in the UK is. Steady stream of social media coming past on the matter. Ten years since it’s been new.

‘I’ve had to tell my friends’ group chat they’ll need to discuss the Gavin and Stacey special somewhere else,’ Ellie said emphatically. ‘I’ve explained that I’m not able to watch it and they’re not allowed to talk about it either, unless they set up another group chat.’

‘Ohh,’ said Lulu, in her Nessa voice. Lulu often slips into Nessa. She’s been doing it for years now. Ever since she watched Gavin and Stacey in a middle-of-the-night tv run while she was burning up with a fever.. at about seven years-old. I sat with her.

She watched it all night. A channel on Now TV played it on loop. It was the thing she clung onto while she battled her fever. She didn’t understood it all – especially the adult-themed bits – but truth be told 😊, I didn’t mind. Those bits went straight over her head and I loved it too. It was clear Gavin and Stacey was comfort-blanket viewing.

‘OMG – it looks like you find out what happened on the fishing trip!’ Lulu said, scrolling through her phone. She was propped up at the nav desk, her feet tucked under her.

A few moments later, she corrected herself, still studying her phone ‘No, it’s ok. You almost found out.’

I considered it. ‘Surely you can never really find out. What happened on the fishing trip is the eternal mystery.’

‘But El, we don’t know either. We’re sitting here with you.’

Ellie shook her head, all velvet-gloved iron fist. ‘Until we get a VPN, everything stays lockdown.’

She was referring to the code that your devices use to determine your location and whether you can access British-based streaming – like BBC iPlayer. The truth is, we’ve never accessed these VPN code apps. We probably won’t now either, despite our deep desire to watch the Gavin and Stacey special. It just seems like too much hard work. We’ll wait till we come home.. or find it on YouTube. Wishful thinking.

All in all, it was a pretty perfect Christmas Day for Questie though. The weather was perfect (Go Saintes!) and we climbed to the Napoleon Fort again in the morning. The museum wasn’t open this time, but the exercise was useful – considering the meal that was going to follow. We went home and, as the girls and I applied new nail polish, eyeshadow, hair curlers and sarong wraps around our heads, Jack cooked a Christmas feast.

It was the first roast dinner we’ve had since we arrived on Quest – and probably the last for a while. Not that we can’t roast in our gas oven – but doing it today felt like a treat. Treats are by nature, not every week. Tomorrow we’ll go back to the one-pot wonder and feel like sailors again. Maybe cook some omelettes. Ham? Cheese? Mushrooms anyone? 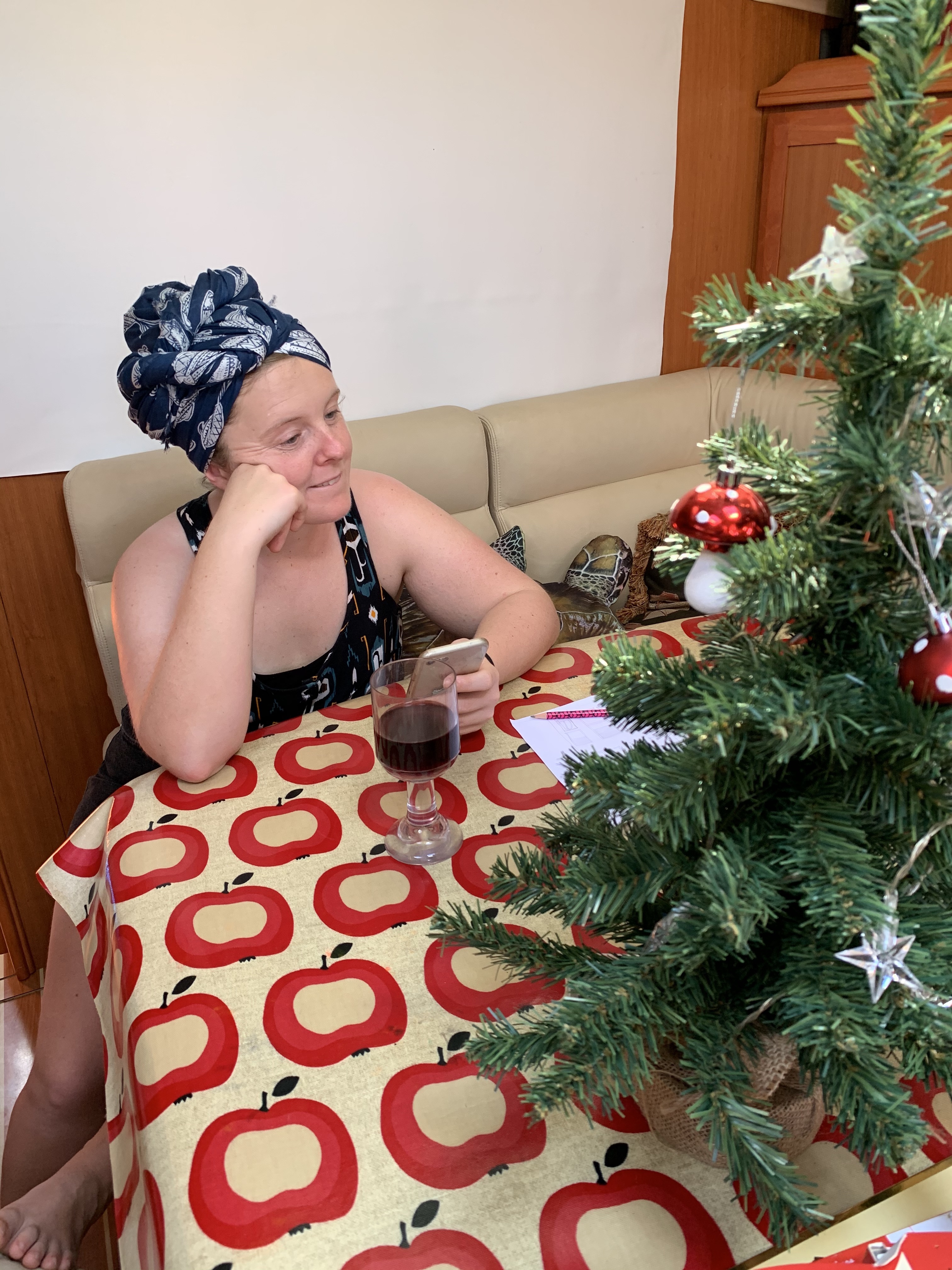 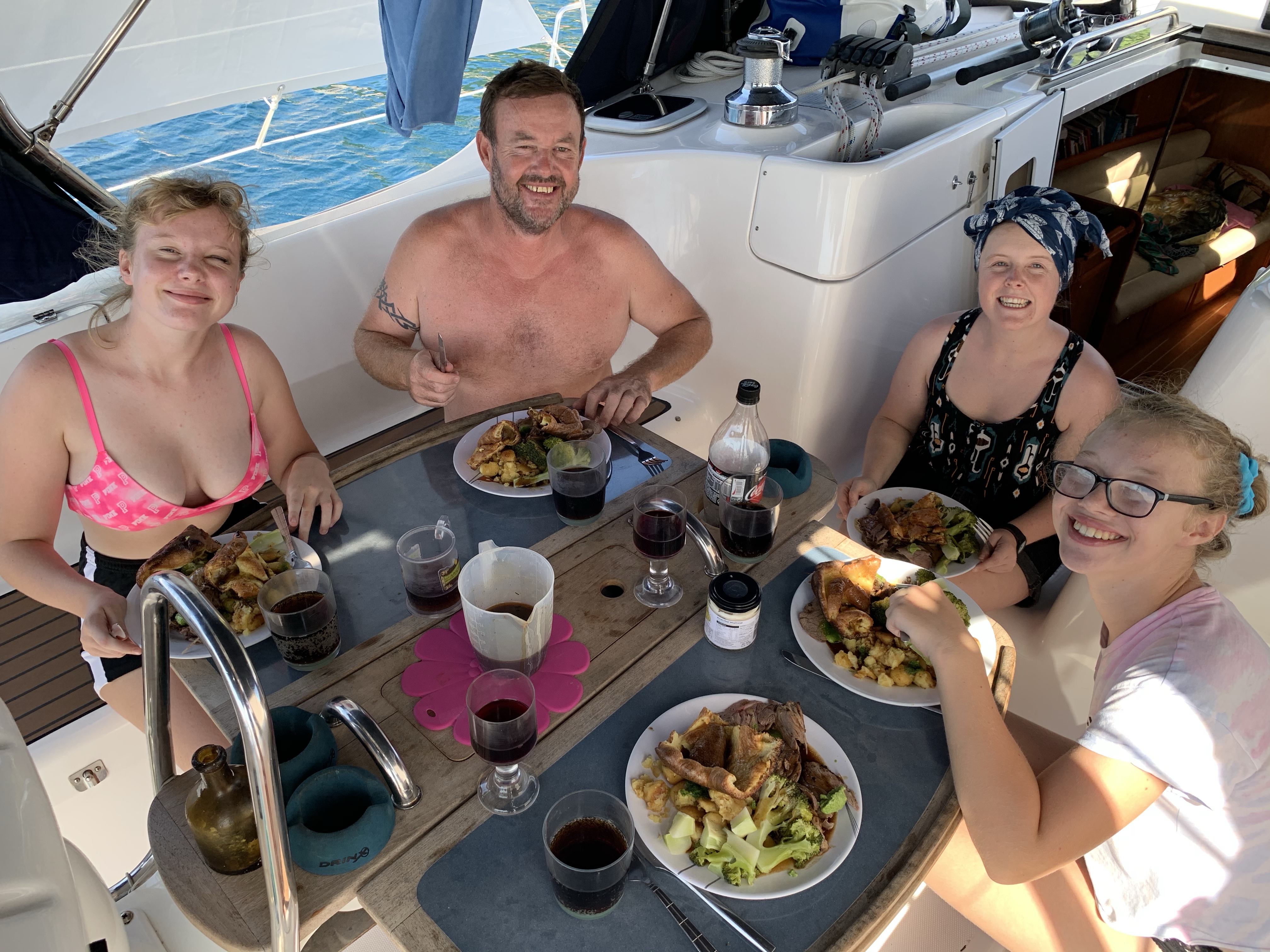