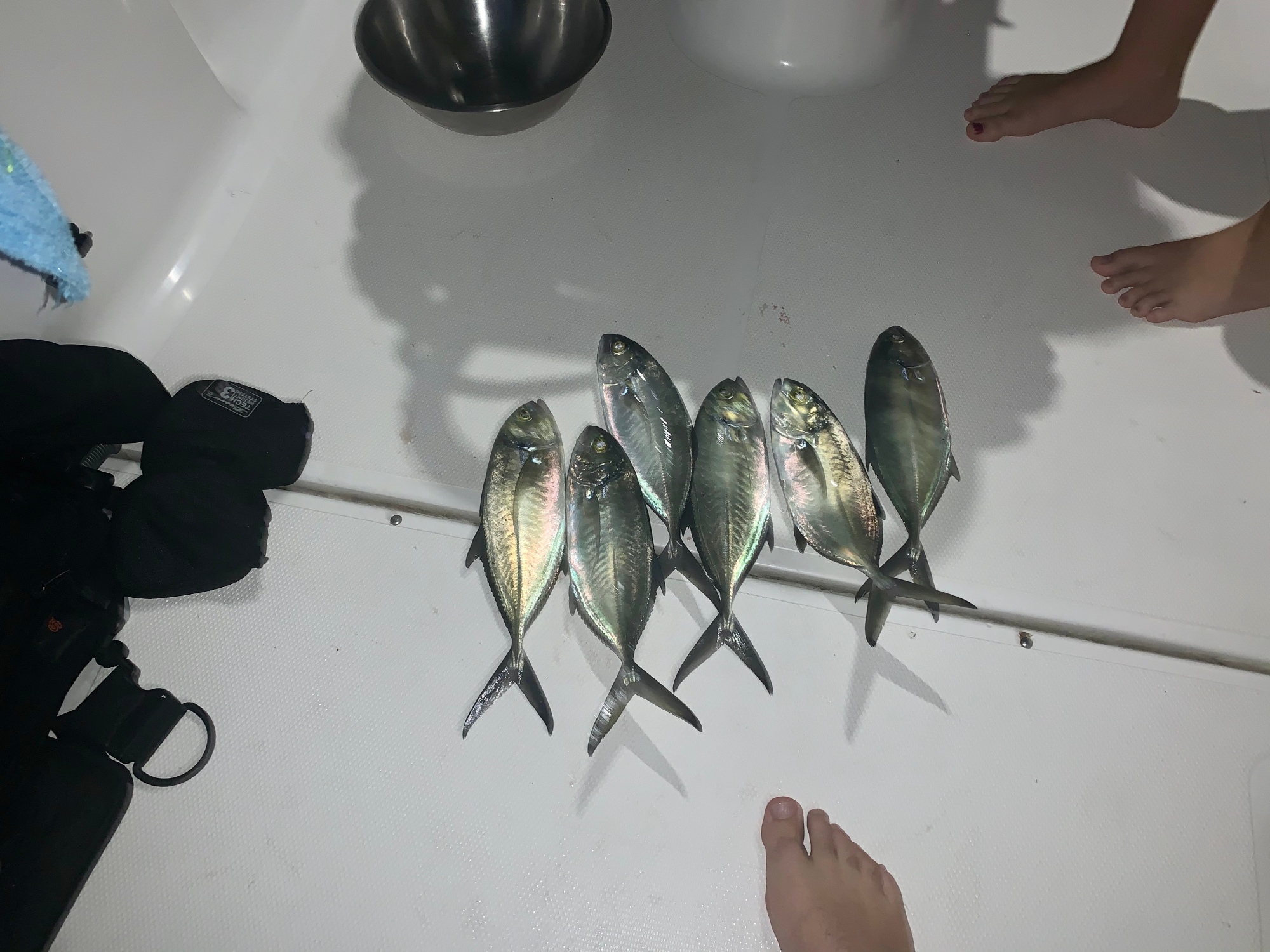 Lulu is learning to fillet a fish. In the balmy evening air, the combination of the cockpit light and Jack’s head torch has turned upstairs into an operating theatre. There’s a chopping board and a very sharp, long and narrow fish-filleting knife.

Jack has caught six fish tonight. Six! Blue runners, we think they’re called. They’re about the same size as mackerel. Rounder in shape. We see these blue runners jumping out of the water all day long. They hunt schools of sprats and small fish. Small fish tend to congregate under and around Quest for protection. They also like to eat whatever comes out of our various pipes. Oh, the circle of life. Go, blue runners! They jump as high as jackrabbits out of the water and back in again.

A lot of the Caribbean islands don’t like cruisers to fish in the anchorages – often stipulating that you’re not allowed to fish from your boat. In an anchorage which is really full, we appreciate this makes sense. Bays could get easily fished out. So, except for the odd, quiet anchorage, we’ve mostly followed the rules.

Then we found out last week that Barbados has no such rule. Derek, Port St Charles’ harbourmaster told us. He said you can fish, spearfish, put a pot at the back of your boat, anything to catch some supper here. Derek went further than that: he insisted we should try. Ok, Derek, if you insist. Since then, come dusk, Jack’s been going out in Edna and trawling slowly across the anchorage. He’s using his spinning rod he bought in the Canary Islands and the small feathery lure from Antigua. He’s added some red rattler balls and crimped on a double hook. Be like waiting.

And success – every night! Well, except the night I went out with him, but that’s not a surprise. I’m a mixed bag of luck.

Tonight, Lulu is holding the last fish to fillet – finally stiff after almost flapping its way back into the sea – over the chopping board. The fish’s eye is still made of glass. Its body is grey with a line of a slate-blue running along its very top. Lulu has just – under Jack’s careful instruction – inserted the tip of the long, thin knife next to this blue line.

He is guiding her, slowly pulling apart the incision in the fish so she can bring the knife down and through the poor fish’s flesh. She is following the edge of its backbone. In this way, her dad explains, there’ll be as little flesh wasted as possible. The fillet will be ideal. She moves the knife back, past a startlingly long pectoral fin and out towards the tail. Jack talks her through, until the knife finally stretches through the skin and pops out. The knife springs back. The light from Jack’s head torch bounces off the blade. Lu grins.