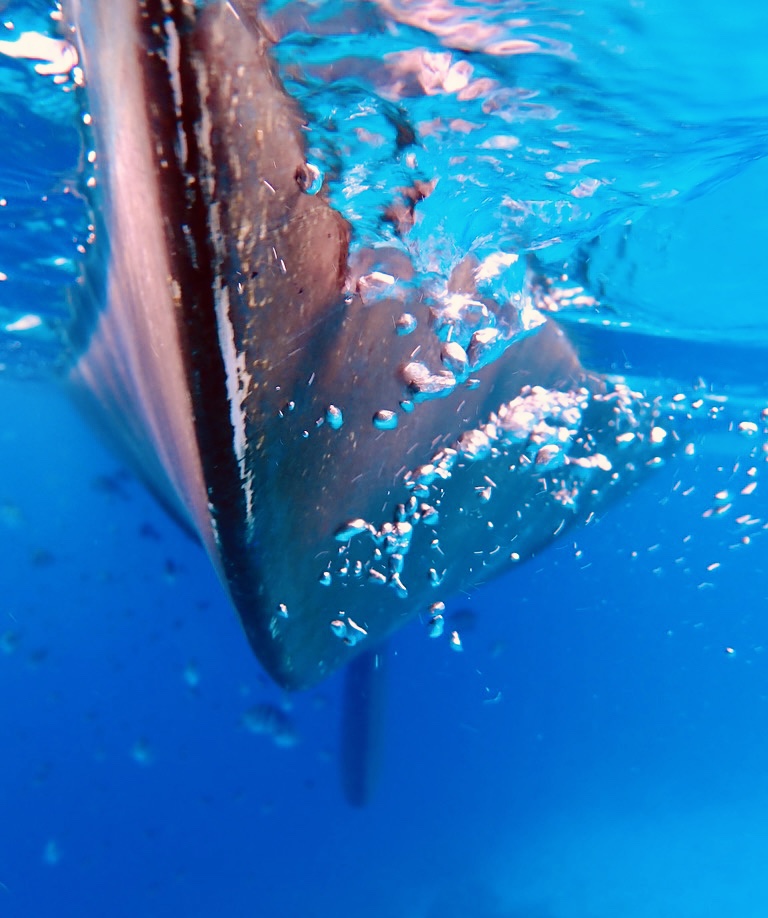 In more than one way. A week of being back in the open, getting used to limited electricity again, limited charging of devices, gas stove to boil the kettle – and of course the slightly sore topic of water conservation. This is because we have three females onboard who like to stay clean – and possibly overused the concept while in the marina.

Still, for the first time this week, we’ve found the balance between charging our stuff and charging the house batteries. We managed to get the batteries to float again. This makes our captain happy. He loves balancing Quest’s energy needs. So when he called out, after studying the regulator and battery panels for the two-hundredth time, ‘We’re floating!’, we finally felt the contentment of floating life. The other kind of floating.

It’s so nice to swim up and down her lines. In the marina, we watched as Quest’s hull become thick with marina slime. One of the first jobs after coming out into the mooring field, was to jump in and wipe her clean. And oh, what a skin she has.

We copper-coated Quest’s hull almost three years ago. We reasoned by doing this, we wouldn’t have to continually cover her in anti-foul paint. It was considerably more expensive than anti-fouling with normal paint, but would save us money overall. Done properly, copper-coating is one of the longest-lasting anti-fouls around.

To be honest, it was one of those decisions we made instead of changing the roof of our bungalow back at home. The dubious ‘Quest needs it more’ justification. We can always paint another layer of tar on the roof, we told ourselves. Quest’s hull, rudder and keel meanwhile, would be covered in layers of copper-based epoxy.

She was done in Peake’s Boatyard in Trinidad. We’ve discovered since that we still get some growth, but one the main differences with copper-coat versus paint is we don’t lose the coating when we remove the growth. We still get barnacles for example, but they are simple to scrape off. They don’t leave little white circles, which was the case with disappearing paint.

It’s definitely been a more dramatic experience than changing the bungalow roof. We’re not scraping barnacles off the roof – yet.

What I didn’t expect was the visceral touch of her. She has a brassy red skin, warm to look at. And she is slightly rough in texture. You can’t swim past without extending your arm to feel. There is an unexpected sensory magnetism in copper. It is deeply satisfying to touch this underwater skin. It’s a large part of the appeal of being out of a marina. We’re floating again.

One thought on “We’re Floating!”