For better or worse, yoga is starting to remind me of pregnancy. Back in winter 2004, I remember fighting with my body. It wasn’t a fight I was going to win. As little Lu was taking shape, I remember the feeling of my stomach muscles indignant against my expanding shape. I also remember the moment they gave in – around Christmas time. They literally sighed and expanded. Thank goodness. Pass us another mince pie.

Yoga is turning out to be a similar feeling. My body, which has long been happily inflexible, is starting to sigh at these yoga moves. Since we are going every morning, the muscles in the back of my legs endlessly complain when I stretch them. Then, today they seemed to suddenly shut up for once – and they gave in. I got the stretch.

There are other yoga moves which seem to change every day. The move itself doesn’t change I mean, but where you put the weight of your body changes. I’ve noticed for example, that some yoga moves have become easier – not by me getting any stronger. It’s more the realisation that the weight isn’t only on one arm, or one leg, but distributed throughout the whole body.

Yoga works on this principle; the weight of your body is enough to challenge all the muscles in your body. You don’t need anything else. I certainly feel challenged! My shoulders feel challenged. Patrice – who read my last yoga blog about the ‘board’ being confused with ‘bored’, has taken exception and now calls board ‘plank’. Except that it sounds like ‘plonk’.

Plonks us down he does too. Over and over again we plonk. He’s started moving us to elbow plonks, back to regular plonks, the downward dog for relief and back again to you know what. The Plonk.

We lift one leg up then and move it to our nose. Hold. Back up again and then across to our opposite elbow. I say this with hope, of course. It would amazing if I could actually get my knee to my elbow. After this, plonking is a relief.

One of the hardest positions is to plonk and then turn, with one arm pointing straight upward to the ceiling. Both legs are held straight, with one foot leaning against the other. Hold. Hold forever. Today, I discovered that the weight isn’t just on one arm and wrist though. It’s on the stretch of the torso down into the leg. This holds this arm up as well.

After all our stretch, weight and hold, we do the impossible position at the end – for fun. These are the positions we could do when we were little kids. Or at least we laughed when we tried to do them. Gav took this sneaky pic of me the other day, trying some impossible head stand that even Patrice said was hard. Saying that, I did push a couple of kids out. That seemed pretty impossible too. Our bodies really are strange and funny things. 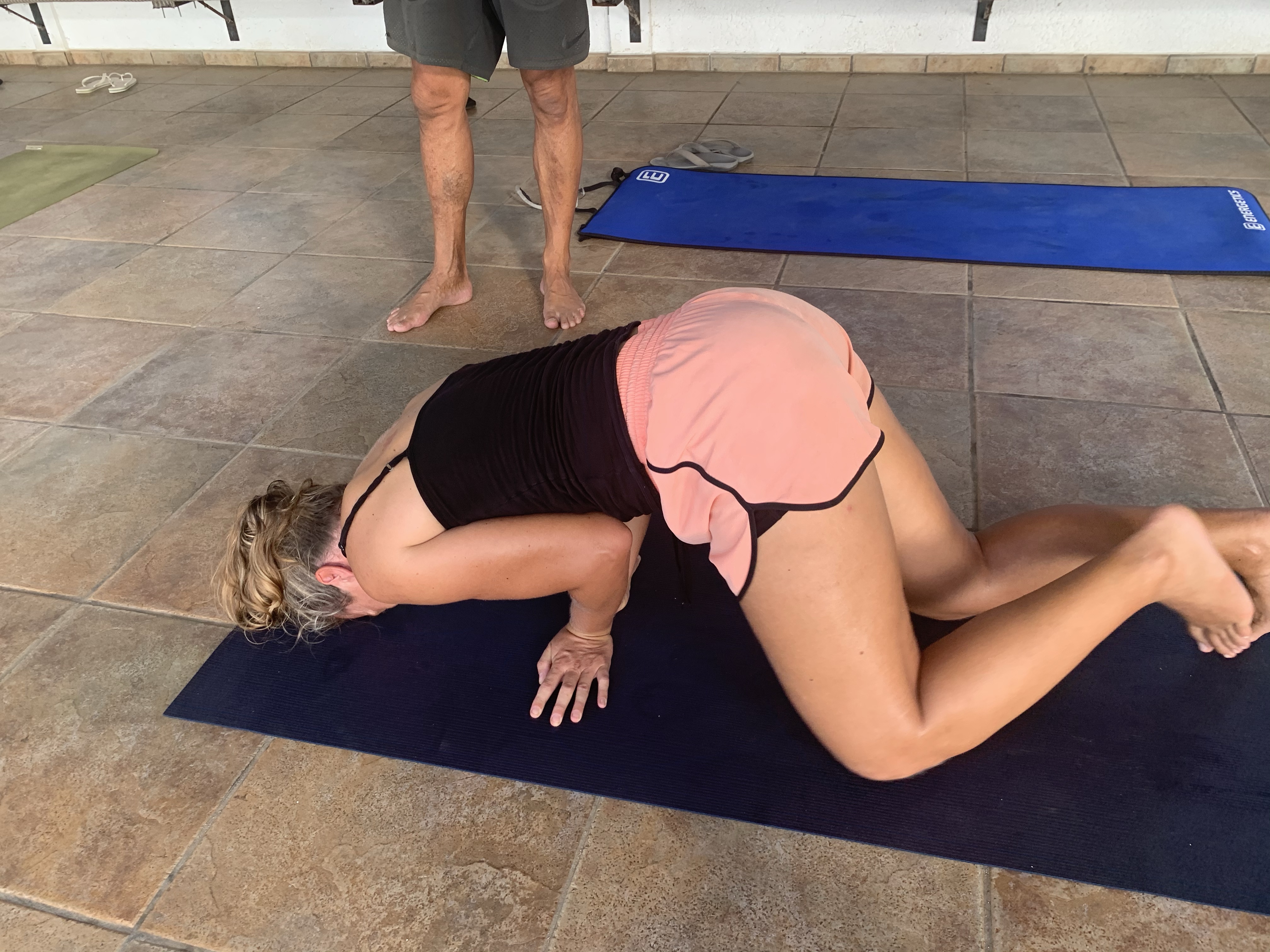